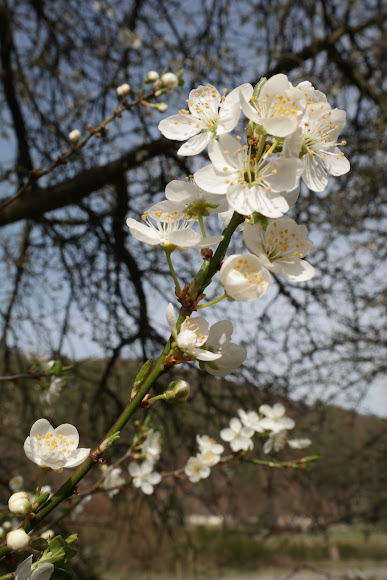 Prunus avium is a deciduous tree growing to 15–32 m (49–105 ft) tall, with a trunk up to 1.5 m (4.9 ft) in diameter. Young trees show strong apical dominance with a straight trunk and symmetrical conical crown, becoming rounded to irregular on old trees. The bark is smooth purplish-brown with prominent horizontal grey-brown lenticels on young trees, becoming thick dark blackish-brown and fissured on old trees. The leaves are alternate, simple ovoid-acute, 7–14 cm (2.8–5.5 in) long and 4–7 cm (1.6–2.8 in) broad, glabrous matt or sub-shiny green above, variably finely downy beneath, with a serrated margin and an acuminate tip, with a green or reddish petiole 2–3.5 cm (0.79–1.38 in) long bearing two to five small red glands. The tip of each serrated edge of the leaves also bear small red glands.[15] In autumn, the leaves turn orange, pink or red before falling. The flowers are produced in early spring at the same time as the new leaves, borne in corymbs of two to six together, each flower pendent on a 2–5 cm (0.79–1.97 in) peduncle, 2.5–3.5 cm (0.98–1.38 in) in diameter, with five pure white petals, yellowish stamens, and a superior ovary; they are hermaphroditic, and pollinated by bees. The ovary contains two ovules, only one of the becomes the seed.[16] The fruit is a drupe 1–2 cm (0.39–0.79 in) in diameter (larger in some cultivated selections), bright red to dark purple when mature in midsummer, edible, variably sweet to somewhat astringent and bitter to eat fresh. Each fruit contains a single hard-shelled stone 8–12 mm long, 7–10 mm wide and 6–8 mm thick, grooved along the flattest edge; the seed (kernel) inside the stone is 6–8 mm long.

Next to river banks.

Prunus avium, commonly called wild cherry, sweet cherry, or gean,is a species of cherry native to Europe, Anatolia, Maghreb, and western Asia, from the British Isles south to Morocco and Tunisia, north to the Trondheimsfjord region in Norway and east to the Caucasus and northern Iran, with a small isolated population in the western Himalaya.The species is widely cultivated in other regions and has become naturalized in North America and Australia.