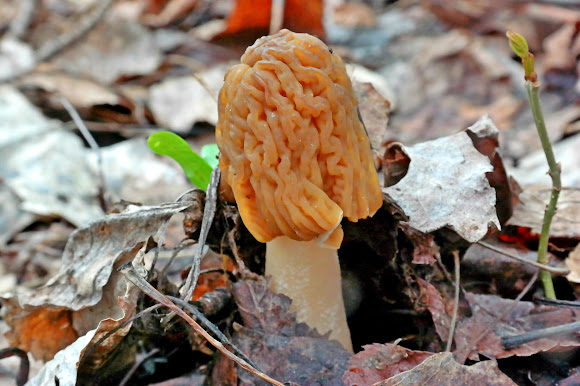 The cap of this fungus (known technically as an apothecium) is 2 to 4 cm (0.8 to 1.6 in) in diameter by 2 to 5 cm (0.8 to 2.0 in) long, with a conical or bell shape. It is folded into longitudinal ridges that often fuse together (anastomose) in a vein-like network. The cap is attached to the stem at the top only—hanging from the top of the stipe, with the lobed edge free from the stem—and varies in color from yellowish-brown to reddish-brown; the underside of the cap is pale. The stem is 6 to 12 cm (2.4 to 4.7 in) long by 1 to 2.5 cm (0.4 to 1.0 in) thick, cream-white in color, and tapers upward so that the stem is thicker at the base than at the top.Although the stem is initially loosely stuffed with cottony hyphae, it eventually becomes hollow in maturity; overall, the mushroom is rather fragile.The spore deposit is yellow, and the flesh is white.

The fruit bodies of V. bohemica grow singly or scattered on the ground in woods in early spring, often before the appearance of the morel, and throughout the morel season.It is often found along riverbanks, near cottonwoods, willows and aspens, often buried in plant litter.The fungus prefers to fruit in moist areas with ample sunlight.

The edibility of this species is questionable; although Verpa bohemica is eaten by many, consumption of large amounts in a single sitting, or on successive days, has been reported to cause poisoning in susceptible individuals.