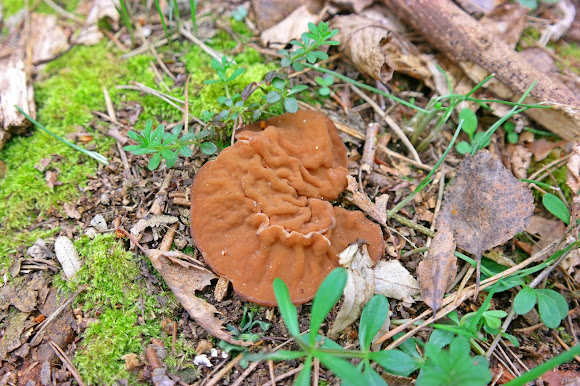 Fruit bodies produced by this fungus are cup- or disc-shaped, up to 20 cm (8 in) wide. The interior surface of the cup, the hymenium, is dark brown. It tends to become folded into vein-like markings, hence the specific epithet venosa; these markings, however, may be absent in young individuals.The exterior surface is a whitish color, covered with pustules. There is a short stipe that anchors the cup to the ground. Although young fruiting bodies are cup-shaped, when they are 7 to 8 cm (2.8 to 3.1 in) in diameter, the apothecia split and flatten down to lie in the soil. They are very brittle. The fruit bodies have been estimated to have a lifespan of up to 12 weeks.The flesh of the fungus has a bleach-like odor when it is broken.

This fungus is typically found growing on the ground among mossy or needle-covered soil among conifers; they are often difficult to notice because their brown color typically blends into the background. They have been noted to prefer to grow on banks or slopes rather than flat areas. This species is also referred to as a "snowbank mushroom" because fruit bodies typically appear around the edges of melting snowbanks.In Europe, the fungus typically fruits from March to May.