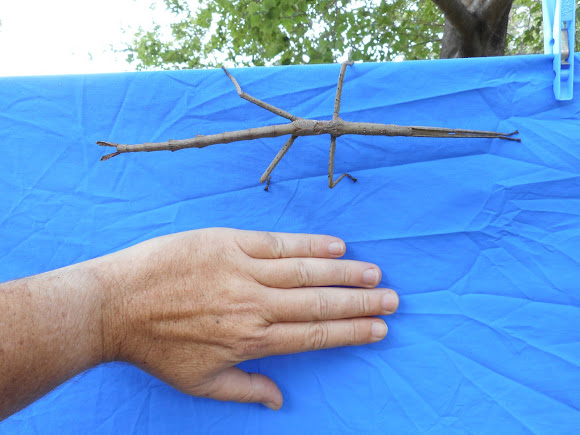 One good reason why I bring my washing in before dark. This is a Tessellated Stick Insect, and because of its overall size and antennae length, is easily identified as a female. Males are smaller, but have longer antennae. Males can also fly, whereas the females can't. They are a common species of stick insect endemic to the Brisbane area. They usually feed on eucalyptus, but also adapt to other trees and grasses. Most other species of stick insects usually are low in population, but this species is known to occur in plague proportion from time to time. The name comes from the dark black tessellations, which resemble small spines on the thorax. PS: I estimate the total length of this female to be 28-29 cms (around 11 inches) from tip of the outstretched forelegs (right of the photo) to the tail fillaments. She's quite a large specimen.

Found clinging to my washing, beneath a large chinese elm tree, in a leafy suburban backyard in inner-city Brisbane.

Here's a male I spotted elsewhere in Brisbane - http://www.projectnoah.org/spottings/254...

Hey, Daniele. How are you? Nice to be back, and totally refreshed. I took a wee break from most of my usual projects over the summer months. Just doing different stuff.

Nice to see you again on Project Noah Neil. This is a fantastic series! Great info as well as usual.

Fingers crossed. Thanks for the nomination :)

Haha yours is a female. Check out the wiki link on your spotting. Fascinating.

I have no idea...I was sort of hoping you might know...

Do you know if your spotting is male or female. Might be a match.