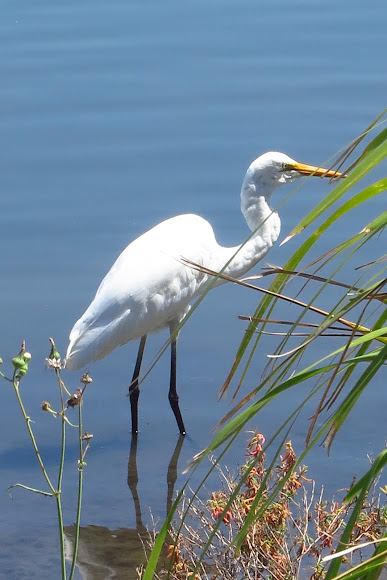 The Eastern Great Egret's overall plumage is white, and for most of the year, when not breeding, the bill and facial skin are yellow. The feet are dark olive-grey or sooty black, as are the legs. During the breeding season, the bill turns mostly black and the facial skin becomes green. Also at this time, long hair-like feathers (nuptial plumes) hang across the lower back, and the legs become pinkish-yellow at the top. Young Great Egrets are similar to the adults, but have a blackish tip to the bill. The egret breeds across Australia, but only rarely in the southwest of the continent or dry interior. The largest colonies within Australia are in the Top End and Channel Country, which can number several thousand pairs. Colonies in the southeast of Australia can number several hundred pairs. The bird is an uncommon autumn and winter visitor to Tasmania.

Regenerated area of Homebush Bay, in Sydney's Bicentenial Park. The waterbird refuge was created in the 1950's as a result of unfinished works to reclaim land from estuarine mudflats. It is part of a network of habitats along the Parramatta River. Salt pans, tidal ponds and mangroves dominate the area. This pond is only a stone's throw from Sydney's Olympic Park, where the 2000 Olympics were held.

Here's a previous spotting I saw in Brisbane. This is of an egret with its breeding plumage - http://www.projectnoah.org/spottings/732...