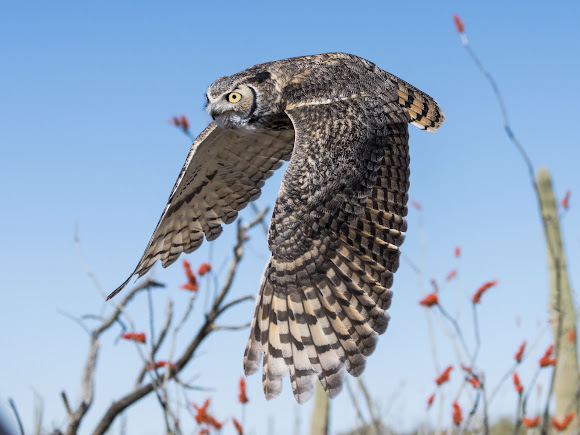 As pictured, this is a larger owl, second in size in North America only to the Great Gray Owl. It has feather tufts on its head which at times appear as horns, hence its name (2nd photo above).

This owl was initially spotted at the Desert Ridge Resort in Phoenix, AZ. It was perched on a room balcony rail. It seemed to have an interest in something on the balcony. The surrounding area is urban with some open desert and a golf course with pine, mesquite and palm trees. In talking to the resort staff, we were told that there is a nesting pair on the property, and they are usually spotted in early morning and evening hours. It hunts mainly at night. This owl according to sources can be found throughout both North and South America.

In researching for this post, it is noted this aggressive hunter has a varied diet…which includes animals one would expect including mice, rats, rabbits, and lizards in the Arizona desert. Of interest also are reports that it eats skunks and occasionally attacks porcupines (see Audubon Guide to North American Birds). If true, a porcupine/Skunk diet cannot always turn out well for either party.

Only just caught up with this spotting. Brilliant Jim and well done on your nomination.

Nikon D810...but any good digital camera set at high shutter speed and low aperture setting would do just as well.

Great shot! what camera do you use to get such a good action shot?

Thanks Neil, Sukanya and Bruno...the nice thing about posting in Project Noah is researching the spotting. I usually learn something I did not know before the post.

Excellent spotting and photos. That is one handsome owl. Wonderful, informative info too. I like that :)