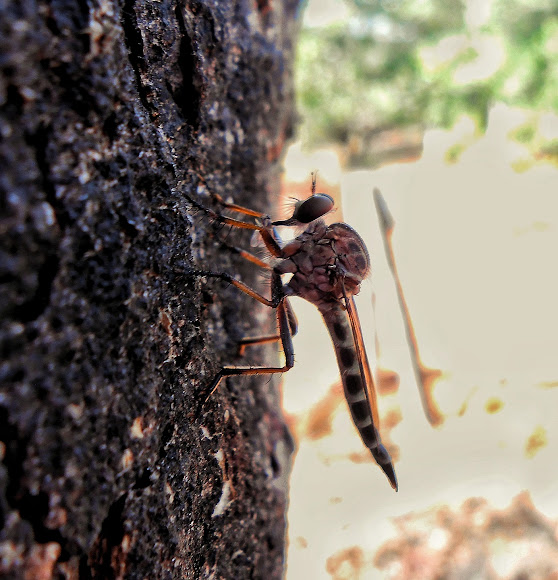 The robber flies are an abundant and diverse family (Asilidae) known for their predatory behavior. Asilidae diversity can be attributed to their broad distribution, as most species tend to occupy a selective niche. As their common name implies, robber flies have voracious appetites and feed on a vast array of other arthropods, which may help maintain a healthy balance between insect populations in various habitats (Joern and Rudd 1982, Shurovnekov 1962). Asilidae adults attack wasps, bees, dragonflies, grasshoppers, other flies, and some spiders. Robber flies are particularly abundant in arid and sunny habitats, which are optimal conditions for observing their many morphs and behaviors.

The Asilidae enjoy a worldwide distribution, with some groups limited to certain regions (Hull 1962). For instance, the Megapodinae spp. are unique to the Neotropical region. Large island chains tend to encompass abundant Asilid faunas, particularly those south of Asia. By contrast, smaller islands such as the Hawaiian chain have no indigenous or introduced species (Hull 1962). The majority of robber fly species are found in dry, sandy conditions, as confirmed by the diversity of species found in such locales. Some species are well adapted to desert climates, where they are known to thermoregulate in response to temperature variations throughout the day (O'Neill et al. 1988, Morgan and Shelly 1988, O'Neill and Kemp 1990). Few species occur in woodland areas, and those that do tend to aggregate along the edges, near grasslands. In Florida, all four subfamilies of Asilidae (Asilinae, Dasypogoninae, Laphriinae, and Leptogastrinae) are present,. Within these subfamilies, the following genera are known to exist in Florida: