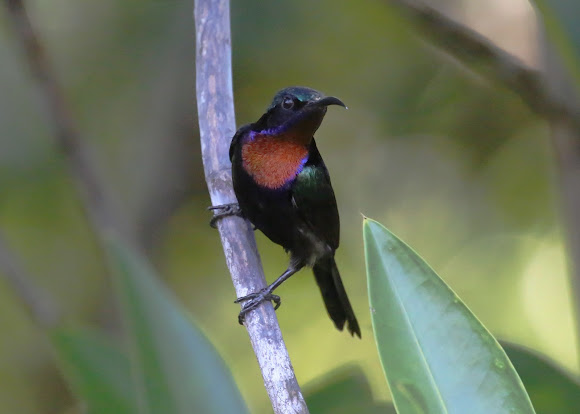 Large sunbird at around 14cm long. The male appears black but when the light is right this bird shows a dark metallic purple with shiny green crown and shoulder patch. The throat patch is an iridescent coppery-red bordered in a lighter purple. The tail is quite long in this species. The female is dark olive above, yellow below with greyish head and throat. It also has an incomplete eyering which can be diagnostic in the field, and white outer tail feathers.

Found in coastal mangroves. Although listed as 'Least Concern' worldwide, in Singapore is declining slowly due to loss of habitat.

This bird was seen on the relatively new development of the Kanji Coastal Walkway next to the Sungei Buloh Wetland Reserve. Both places I would recommend for anyone visiting and interested in, Singaporean natural history.