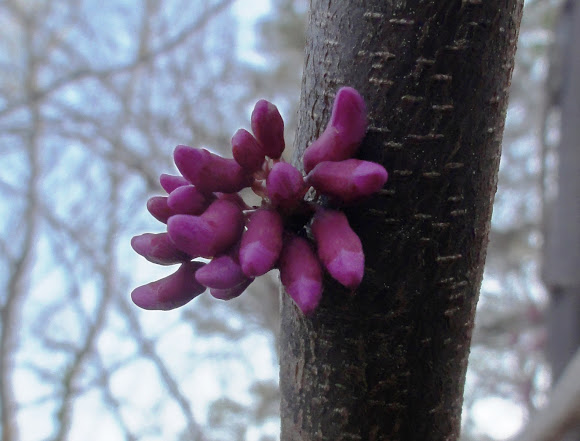 Cercis canadensis L. (eastern redbud) is a large deciduous shrub or small tree, native to eastern North America from Southern Ontario, Canada south to northern Florida. The flowers are showy, light to dark magenta pink in color, 1.5 cm (½ inch) long, appearing in clusters from Spring to early Summer, on bare stems before the leaves, sometimes on the trunk itself. I have always thought this last trait was very interesting, and I found a great example to show here. The buds were just beginning to open on this tree, so most of the flowers still looked like purple jelly beans.

In the wild, eastern redbud is a frequent native understory tree in mixed forests and hedgerows.

Spotted growing in an untended barrier lot in a subdivision. Native Americans consumed redbud flowers raw or boiled, and ate roasted seeds. In some parts of southern Appalachia, green twigs from the eastern redbud are used as seasoning for wild game such as venison and opossum. Because of this, in these mountain areas the eastern redbud is sometimes known as the spicewood tree.