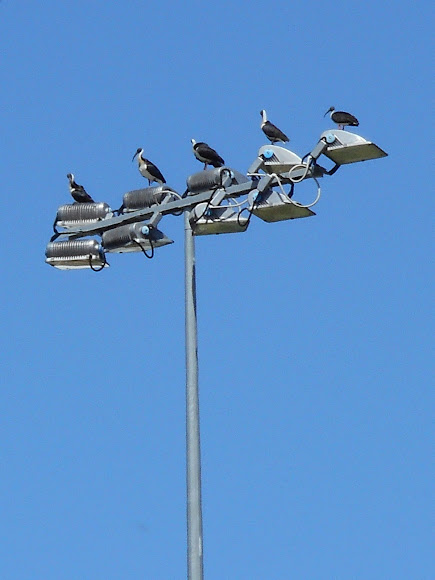 The Straw-necked Ibis (Threskiornis spinicollis) is a bird of the ibis and spoonbill family Threskiornithidae. It can be found throughout Australia, New Guinea, and parts of Indonesia. Adults have distinctive straw-like feathers on their neck, and the darker feathers, particularly around the wings, have a beautiful iridescence when seen in the right light. I like these birds.

They prefer freshwater wetlands, and swamp and lagoon margins, rather than coastal saltwater areas. They also gather in groups to scour grasslands and pastures for food. These birds were spotted sitting high upon the flood lights of the local football oval, which are at least 100 feet high. It's the first time I've seen them perched up there, and am more likely to see them grazing on the grassy parkland below.