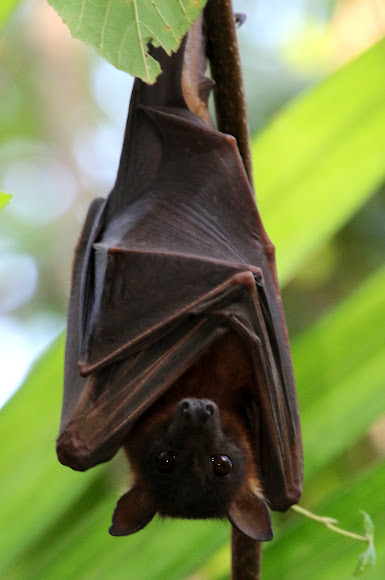 Little red flying-foxes vary in colour from reddish brown to light brown, and there are patches of light, creamy, brown fur where the wing membrane and shoulder meet. Head is covered with greyish fur and, in some forms found in northern Queensland, grey fur continues down the back. Wings are brown and semi-transparent when seen flying during the day. This helps identify the species. Average weight 300–600g Head-body length125–200mm

Breeding: Little red flying-foxes form large camps for mating that can include up to 100,000 individuals. Mating occurs November–January, young are born in April and May. Males have harems of two to five females in small, defended territories. Young begin to fly at two months. Female cares for young for several months while they develop the basic skills of finding food. Food: Prefer nectar – especially eucalypt, bloodwood and angophera nectar. Will eat fruit, sap and insects and cultivated fruit when other resources are unavailable. Behaviour: In northern Australia, little red flying-foxes sometimes leave their roost sites before dark and feed during the day on overcast wet season days. Often crash land in trees and need to climb a tree limb to take off again. Efficient climbers that use their jointed thumbs as well as feet to climb about. Prefer to roost near the ground.

Congrats Mac for the SOTD!

Great capture MacChristiansen,congrats on the well deserved SOTD and thanks for sharing

Congratulations MacChristiansen, this adorable flying fox has been chosen as our Spot of the Day! Thank you for sharing!

Great spotting and photo, Mac. I've never seen one of these little guys before. Very good info too.