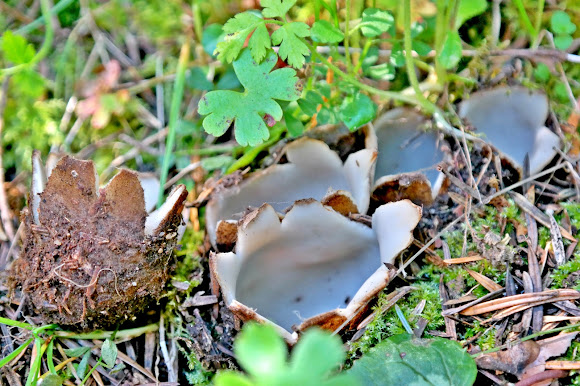 Pale cream to light greyish beige on the smooth inner (hymenial or spore-bearing) surface, Cedar Cups develop over several months as underground spheres before breaking through the surface of the soil and splitting open in the form of typically 5 to 8 irregular rays. Up to 5cm tall, the cups are typically 5 to 7cm across when fully open. The specimen shown here is not yet fully mature, and its star-like rays will fold back further to create a broader, shallower cup with a crown-like rim. Like most cup fungi the flesh of the Cedar Cup is quite brittle. Varying in colour from orange-brown to reddish-brown, the outer surface is infertile and covered in short, curly brown hairs. (The spores are produced on the shiny inner surface of the cup.) Asci: Typically 370µm x 19µm, with eight spores per ascus. Spores: Ellipsoidal-fusiform, smooth, 27-37 x 13-16µm; each usually containing two large oil drops. Spore print: White

On dryish soil beneath cedar trees, usually in small groups.

Geopora arenosa and Geopora tenuis are much smaller and paler; they appear in dry sandy places, the latter most particularly on sand dune systems.