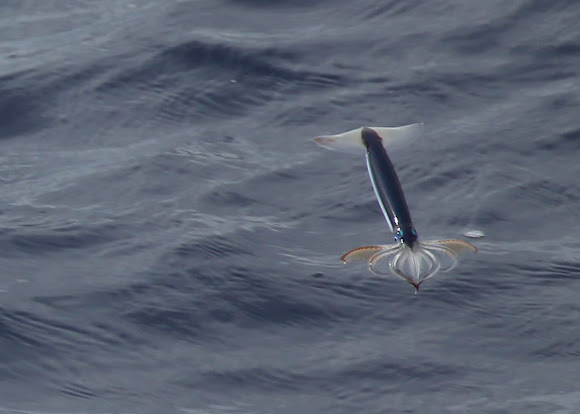 Small tubular squid about 16cm (6") long. Mantel is dark blue on dorsal surface, paling to light blue/silver along sides to ventral surface. Two bright blue 'neon' spots above the eyes. Wings are elongated triangles (longer than they are wide) and when in flight the tentacles are flattened out and joined by a membrane.

These were seen in northern New Zealand waters obviously on or above the surface over very deep water. They were disturbed by the ships hull and would would break the surface in front of the ship and glide for a good 15-20 meters. seen in groups of 6-20 and sometimes individually.

Todarodes pacificus has not been recorded in Southern Pacific as far as I know as normally a northern Pacific species.

Thanks Muckpuk. They were amazing to see.

Can not stop looking at this!
So envious!

Thank you Polilla. It has been a pleasure to share these spottings with you all and like wise it's great to see everyone elses too.

Thank you Jim. Coming from you that is praise indeed.

Your postings have been highlighted many times in 2016, Rob, and it is fitting that you were well recognized on this one. I envy your talent...Well Done!

Thank you Daniele, Mark, Liana, Albert and Felix for you comments and support of this spotting. Seeing and photographing these guys was a real highlight to last year.

Congrats Robert on the first place

Congrats on best 'others' Rob.

Thanks for the clarification and update Robert. This was needed especially as this spotting came first in our 2016 Best Photo mission for the category "Others"! Congratulations!

Thank you Liana. When I started this I didn't really know a flying squid was a thing, let alone ever seeing one! It does give a bit of closer to get a name. I hope all well in your world. Rob

Looks like it is a range extender Mark. The squid world has been quite excited here. They might have been down here for ages just no one thought to photograph one and record it. Gotta love PN! :)

That's fantastic news Rob! I'm so pleased you were able to ID this amazing looking squid :)

My lucky day. :) Glad we got close Rob especially if it's a range extender.

Thank you again Mark for your ID. Looks like you were the closest so congrats and I really appreciated your input. Rob

Hi Daniele,
After extensive discussion these squid are being recorded as Pacific Flying Squid (Todarodes pacificus). Apparently it is extremely difficult to ID without the squid in hand to check the formation of the sucker cups. I am happy that all avenues have been explored and to record this as such. To my knowledge this is a very unusal spotting in the South Pacific.
Robert.

Do you have an update on this ID Robert?

For those interested it looks like we are getting closer to an ID. Sorry it's taken so long.

Thanks Lauren. They appeared to be moving away from the hull of the ship. Guess to a squid a large solid thing like that would have to treated as a potential threat. I have also learned that these guys migrate long distances and there seems to be some thought that gliding take less effort than swimming. Either way they are spectacular when they start flying!

Truly amazing and a wonderful picture! I had missed this one and I didn't know that squid "flew". Joining the flying fish and the rays. Do they do that to escape predators?