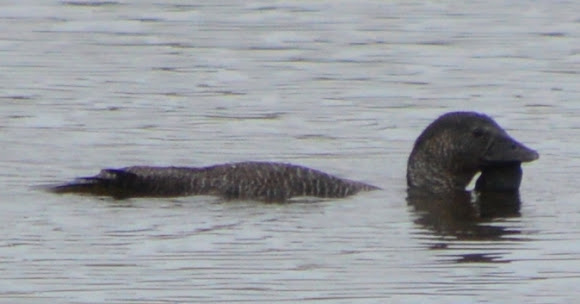 A duck that is happier than most species of duck in water, this one spends a long time diving. It is the only member of the Biziura genus & is native to southern areas of Australia. The body is long up to about 70cm in males & 10 to 20cm smaller in females, the tail is spiky & carried fanned out above the back often (otherwise it is streamlined lengthening the body), this is a male & shows the throat lobe under the beak which can be inflated during courtship. The feathers on male & female are speckled or pinstriped dark grey/brown & white. Females can often be difficult to tell apart from several other duck species, but males easier due to the beak lobe. The Musk name is due to the musky odour these ducks emit especially during breeding season. Rarely leaves the water as it is awkward on land.

Found throughout southern regions of Australia in east and west, prefers deep still waterbodies with reeds & other aquatic vegetation. This one in man-made drainage channels from wetlands in north east NSW.

Not the greatest of photos & I hope to get better ones, this duck was a surprise find & too far for my camera. Although not considered endangered, widespread continued clearing of suitable habitat (wetlands) & drier climatic conditions are putting pressure on this and other species that rely heavily on a water environment.