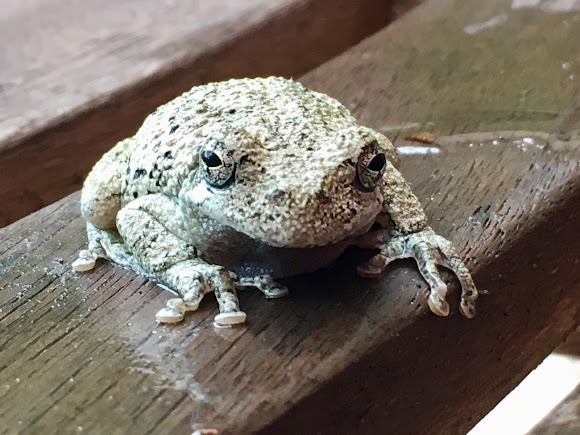 As the scientific name implies, gray treefrogs are variable in color owing to their ability to camouflage themselves from gray to green, depending on the substrate where they are sitting. The degree of mottling varies.[3] They can change from nearly black to nearly white. They change color at a slower rate than a chameleon. Dead gray treefrogs and ones in unnatural surroundings are predominantly gray. The female does not call and has a white throat; however, the male does call and can show a black/gray/brown throat during the breeding season. The female is usually larger than the male. They are relatively small compared to other North American frog species, typically attaining no more than 1.5 to 2 in (3.8 to 5.1 cm). Their skin has a lumpy texture to it, giving them a warty appearance.

Found him resting on a chair on my deck.

Thank you, Dawn! These lil guys are plentiful in our area....Especially since we've been having so much rain.

What an interesting frog. Thanks for sharing.