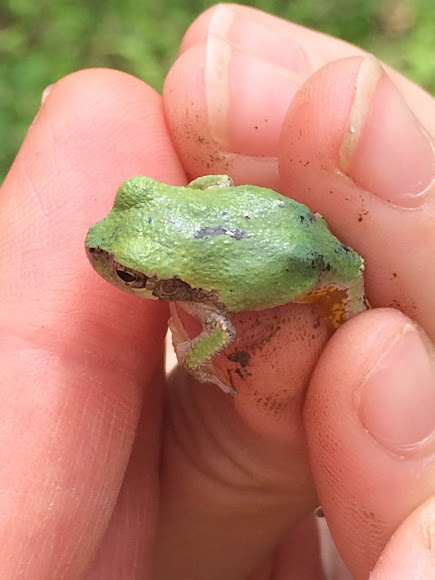 Small young green-colored frog with sticky pads on his toes and yellow under his legs.

Woods near our backyard in the middle of a HUGE patch of May Apples. There was more than one there two, there were FOUR of them, one had obviously just gotten of a white tree, because it was very not green and didn't blend in well. (We also found a very pretty red/orange three-toed box turtle!)

I looked down at the center o one of the May Apples and said "That's not a May Apple!" However we did NOT hear it's call, so we have NO FRIGGIN IDEA if it's a Cope's Gray Tree Frog, or a Gray Tree Frog. It's one or the other, but yeah... We're going with Gray Tree Frog. (Of COURSE they look EXACTLY ALIKE!)

Spotted by a stud ent at Gala Academy