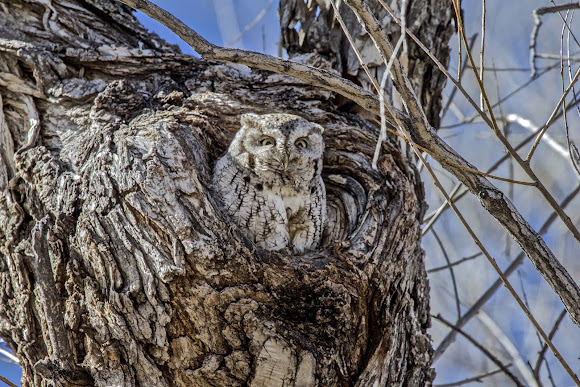 The Eastern Screech-Owl is a short, stocky bird, with a large head and almost no neck. Its wings are rounded; its tail is short and square. Pointed ear tufts are often raised, lending its head a distinctive silhouette. It can be either mostly gray or mostly reddish-brown (rufous). Whatever the overall color, they are patterned with complex bands and spots that give the bird excellent camouflage against tree bark. Eyes are yellow.

fairly common in most types of woods (evergreen or deciduous; urban or rural), particularly near water. It shuns treeless expanses of mountains or plains.

He looks like he is surprised you found him at home!