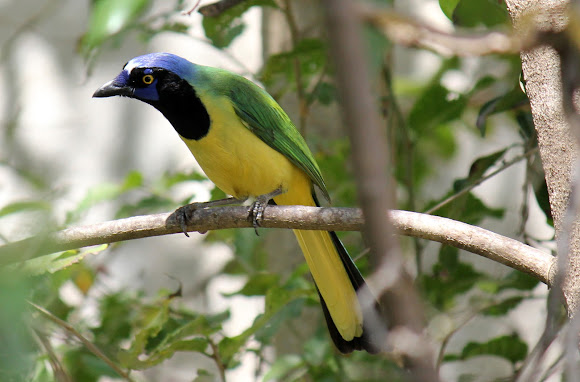 Photo take at my backyard, common in this area this beautiful bird usually moves in small groups, about 28 cm tall has a yellow chest and black neck , blue head, the feather on top and wings are green color so is the tail, hard to see in open areas usually in deep jungle forest. They have feathers of yellowish-white with blue tips on the top of the head, cheeks and nape, though some taxa have more blue than others. In South American populations, the crown can appear almost entirely white, with less extensive blue, and there's a prominent black crest behind the bill. A black bib forms a thick band up to the sides of the head as well as a stripe through the eye line and one above it. The breast and underparts typically are bright to dull yellow, or strongly green-tinged in the far northernmost part of its range. The upper parts are rich green. It has large nasal bristles that form a distinct tuft in some subspecies, but are less developed in others. The color of the iris ranges from dark brownish to bright yellow depending on the subspecies.

Such a beautiful bird!