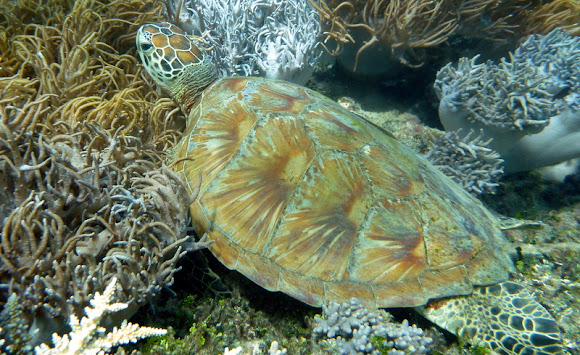 If you want to hold your breathe for a long time it is best to move slowly and as little as possible. In other words; it is best to be cool. Green turtles can hold their breathe for 4-7 hours. The world record for a human is 22 minutes (which means a turtle is approx. 15 times cooler than us). A turtle is also cooler than us because their shell can protect them from land crocodiles that ran around 200 million years ago before the dinosaurs arrived. and … Pregnant female turtles will reduce the amount of stress hormone they release so they remain calm for their developing young. They have green fat They can create energy without oxygen but it produces lactic acid. To stop the acid from burning them they release calcium from their shell into their blood stream. This means that Green Turtles have liquefied rock in their blood, which is cool. Turtles are cooler than us because they can feel the pull of magnetic north (they have iron oxide in their brain which is sensitive to magnetic fields). They can swim in Alaska without wearing a wetsuit. Only 1 in every 1000 survive so when you see a Turtle you are seeing ‘the lucky one’. There was once sea turtles swimming around that had 4.6m wide shells Even before they are born they look after the ones they love, they talk to each other in the egg and make sure that everyone is ready before they hatch and make a mad dash to safety Green Turtles are also cool because Rob Toomey is their Guardian and to me Rob Toomey is as close as a human can get to being as cool as a turtle.