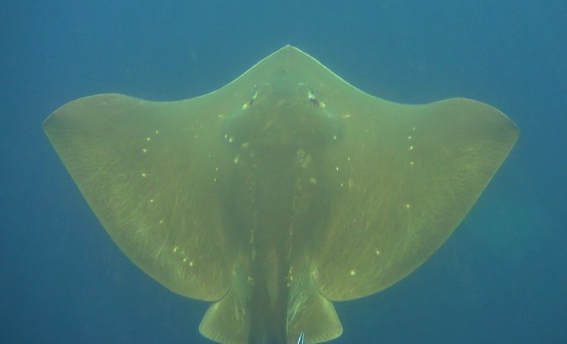 Saw this huge Stingray towards the end of a dive during safety stop back in August 2011. It was an amazing encounter as I was able to swim with it for nearly 10 minutes. Have been trying to get the ID of it and finally managed to get the ID just today :) The smalleye stingray (Dasyatis microps) is a large species of stingray in the family Dasyatidae, measuring up to 2.2 m (7.2 ft) across. Rare but widely distributed, it is found in the Indo-Pacific from Mozambique to India to northern Australia. This species may be semi-pelagic in nature, inhabiting both deeper waters and shallow coastal reefs and estuaries The smalleye stingray has a distinctive shape among its family: the pectoral fin disc is more than 1.4 times wider than long, with the outer corners forming obtuse angles. The anterior margins of the disc are sinuous and converge on a rounded snout with a slightly projecting tip. The eyes are small and immediately followed by a pair of much larger spiracles. The mouth is wide and contains five papillae across the floor. The tail is not quite as long as the disc, and is broad and flattened from its base to the stinging spine. The tail spine of one specimen examined measured 9.1 cm (3.6 in) long and bore 75 serrations. After the spine, the tail abruptly becomes thin and cylindrical, with a low, thick fin fold running underneath. The upper surface of the disc is covered by many large dermal denticles with star-shaped bases, concentrated on the snout. This ray is brown to reddish brown above, darkening towards the tip of the tail, and white below, becoming slightly dusky at the fin margins and on the tail. The dorsal surface bears characteristic large white spots beside the eyes, around the disc center, and in a row on either side about two-thirds of the way to the pectoral fin tips. There is also a row of small white spots on either side of the tail base. One of the largest stingray species, the smalleye stingray can reach a disc width of 2.2 m (7.2 ft) and a total length of 3.2 meters.

The smalleye stingray is widely but possibly discontinuously distributed in the Indian and Pacific Oceans, having been reported from off Tofo in Mozambique, Malé in the Maldives, the coasts of India and Bangladesh, the Gulf of Thailand, Malaysia and Indonesia, the Arafura Sea, and the Philippines.