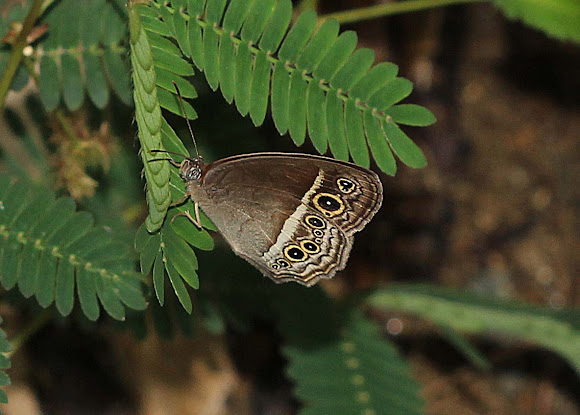 Nymphalidae; Satyrinae; Mycalesis mineus philippina Moore 1892. According to pictures in Wikipedia, both of the Satyrines shown here are Wet Season Forms. Of course, this should be the case as October, is almost at the end of the Wet Season here in Philippines. Philippine Lepidoptera explains: "The SATYRINAE, the satyrines or satyrids, commonly known as the browns, are a subfamily of the Nymphalidae (brush-footed butterflies). They are generally weak fliers and often shun bright sunlight, preferring moist and semishaded habitats. The caterpillars feed chiefly on monocotyledonous plants such as palms, grasses, and bamboos."

I spotted these two Dark Brand Bushbrowns on grasses and undergrowth at the edge of a rice field. They were within a few feet of each other. One was perched on Touch-me-not (Mimosa pudica) and the other appeared to be sipping on rotting vegetation. There were taller grasses and foliage all around, but these two butterflies seemed to have a preference for being close to ground level.