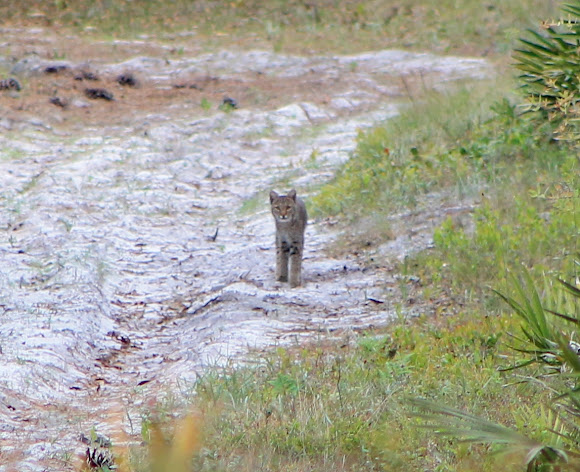 The bobcat resembles other species of the Lynx genus, but is on average the smallest of the four. Its coat is variable, though generally tan to grayish-brown, with black streaks on the body and dark bars on the forelegs and tail. Its spotted patterning acts as camouflage. The ears are black-tipped and pointed, with short, black tufts. There is generally an off-white color on the lips, chin, and underparts. Bobcats in the desert regions of the southwest have the lightest-colored coats, while those in the northern, forested regions are darkest. Kittens are born well-furred and already have their spots.[10] A few melanistic bobcats have been sighted and captured in Florida. They appear black, but may still exhibit a spot pattern.[11] The face appears wide due to ruffs of extended hair beneath the ears. Bobcat eyes are yellow with black pupils. The nose of the bobcat is pinkish-red, and it has a base color of gray or yellowish- or brownish-red on its face, sides, and back.[12] The pupils are round, black circles and will widen during nocturnal activity to maximize light reception.[13] The cat has sharp hearing and vision, and a good sense of smell. It is an excellent climber, and will swim when it needs to, but will normally avoid water.[14] The adult bobcat is 47.5 to 125 cm (18.7 to 49 in) long from the head to the base of the tail, averaging 82.7 cm (32.6 in); the stubby tail adds 9 to 20 cm (3.5 to 7.9 in) [12] and its "bobbed" appearance gives the species its name.[15][16][17][18] An adult stands about 30 to 60 cm (12 to 24 in) at the shoulders.[10][19] Adult males can range in weight from 6.4 to 18.3 kg (14 to 40 lb), with an average of 9.6 kg (21 lb); females at 4 to 15.3 kg (8.8 to 34 lb), with an average of 6.8 kg (15 lb).[20][21] The largest bobcat accurately measured on record weighed 22.2 kg (49 lb), although unverified reports have them reaching 27 kg (60 lb).[22] Furthermore, a June 20, 2012 report of a New Hampshire roadkill specimen listed the animal's weight at 27 kg (60 lb).[23]The largest-bodied bobcats are from eastern Canada and northern New England of the subspecies (L. r. gigas), while the smallest are from the southeastern subspecies (L. r. floridanus), particularly those in the southern Appalachians.[24] The bobcat is muscular, and its hind legs are longer than its front legs, giving it a bobbing gait. At birth, it weighs 0.6 to 0.75 lb (270 to 340 g) and is about 10 in (25 cm) in length. By its first birthday, it will reach about 10 lb (4.5 kg).[14] The cat is larger in its northern range and in open habitats.[25] A morphological size comparison study in the eastern United States found a divergence in the location of the largest male and female specimens, suggesting differing selection constraints for the sexes

The bobcat is an adaptable animal. It prefers woodlands—deciduous, coniferous, or mixed—but unlike the other Lynx species, it does not depend exclusively on the deep forest. It ranges from the humid swamps of Florida to desert lands of Texas or rugged mountain areas. It will make its home near agricultural areas, if rocky ledges, swamps, or forested tracts are present; its spotted coat serves as camouflage.[27] The population of the bobcat depends primarily on the population of its prey; other principal factors in the selection of habitat type include protection from severe weather, availability of resting and den sites, dense cover for hunting and escape, and freedom from disturbance.[9] The bobcat's range does not seem to be limited by human populations, as long as it can find a suitable habitat; only large, intensively cultivated tracts are unsuitable for the species.[25] The animal may appear in back yards in "urban edge" environments, where human development intersects with natural habitats.[52] If chased by a dog, it will usually climb up a tree.[27] The historical range of the bobcat was from southern Canada, throughout the United States, and as far south as the Mexican state of Oaxaca, and it still persists across much of this area. Range maps typically show a pocket of territory in the US Midwest and parts of the Northeast, where it is no longer thought to exist, including southern Minnesota, eastern South Dakota and much of Missouri, mostly due to habitat changes from modern agricultural practices.[13][25][27] While thought to no longer exist in western New York and Pennsylvania, multiple confirmed sightings of bobcats (including dead specimens) have been recently reported in New York's Southern Tier and in central New York.[53] In addition, bobcats sightings have been confirmed in northern Indiana, and one was recently killed near Albion, Michigan.[54] In early March, 2010, a bobcat was sighted (and later captured by animal control authorities) in a parking garage in downtown Houston, TX.[55] In August and September, 2010, a number of sightings were reported in the Houston suburbs of Pearland and Friendswood.and the presence of the Canadian lynx. The bobcat does not tolerate deep snow, and will wait out heavy storms in sheltered areas;[56] it lacks the large, padded feet of the Canadian lynx and cannot support its weight on snow as efficiently. The bobcat is not entirely at a disadvantage where its range meets that of the larger felid: displacement of the Canadian lynx by the aggressive bobcat has been observed where they interact in Nova Scotia, while the clearing of coniferous forests for agriculture has led to a northward retreat of the Canadian lynx's range to the advantage of the bobcat.[25] In northern and central Mexico, the cat is found in dry scrubland and forests of pine and oak; its range ends at the tropical southern portion of the country.[25] [edit] Conservation

The bobcat is crepuscular. It keeps on the move from three hours before sunset until about midnight, and then again from before dawn until three hours after sunrise. Each night it will move from 2 to 7 mi (3.2 to 11 km) along its habitual route.[14] This behavior may vary seasonally, as bobcats become more diurnal during fall and winter in response to the activity of their prey, which are more active during the day in colder months.[13] [edit] Social structure and home range A bobcat on the Calero Creek Trail, in San Jose, California Bobcat activities are confined to well-defined territories, which vary in size depending on gender and the distribution of prey. The home range is marked with feces, urine scent, and by clawing prominent trees in the area. In its territory, the bobcat will have numerous places of shelter, usually a main den, and several auxiliary shelters on the outer extent of its range, such as hollow logs, brush piles, thickets, or under rock ledges. Its den smells strongly of the bobcat.[27] The sizes of bobcats' home ranges vary significantly; a World Conservation Union (IUCN) summary of research suggests ranges from 0.02 to 126 sq mi (0.052 to 330 km2).[25] One study in Kansas found resident males to have ranges of roughly 8 sq mi (21 km2), and females less than half that area. Transient bobcats were found to have both larger (roughly 22 sq mi/57 km2) and less well-defined home ranges. Kittens had the smallest range at about 3 sq mi (7.8 km2).[28] Research has shown dispersal from the natal range is most pronounced with males.[29] Reports on seasonal variation in range size have been equivocal. One study found a large variation in male range sizes, from 16 sq mi (41 km2) in summer up to 40 sq mi (100 km2) in winter.[27] Another found that female bobcats, especially those which were reproductively active, expanded their home range in winter, but that males merely shifted their range without expanding it, which was consistent with numerous earlier studies.[30] Other research in various American states has shown little or no seasonal variation.[28][31][32] Like most felines, the bobcat is largely solitary, but ranges will often overlap. Unusual for cats, males are more tolerant of overlap, while females rarely wander into others' ranges.[30] Given their smaller range sizes, two or more females may reside within a male's home range. When multiple male territories overlap, a dominance hierarchy is often established, resulting in the exclusion of some transients from favored areas. In line with widely differing estimates of home range size, population density figures are divergent, from one to 38 bobcats per 25 sq mi (65 km2) in one survey.[25] The average is estimated at one bobcat per 5 square miles (10 km2).[27] A link has been observed between population density and sex ratio. One study noted a dense, unhunted population in California had a sex ratio of 2.1 males per female. When the density decreased, the sex ratio skewed to 0.86 males per female. Another study observed a similar ratio, and suggested the males may be better able to cope with the increased competition, and this would help limit reproduction until various factors lowered the density.[33] [edit] Hunting and diet

Ok thanks I suspected it was wrong. But just being a regular d human who enjoys being outside , I tend to be clueless

I suggest that you read through our FAQ page regarding what to put in the fields for your spottings.
http://www.projectnoah.org/faq

It is not necessary to copy lengthy descriptions from reference sources here as there is a 'reference links' box for this purpose. (directly from the FAQ page)

I would love to know more about your personal encounter with this lovely creature! Did you see it in a park? What did it do when you saw it? Have you seen one before this time? I'm curious!