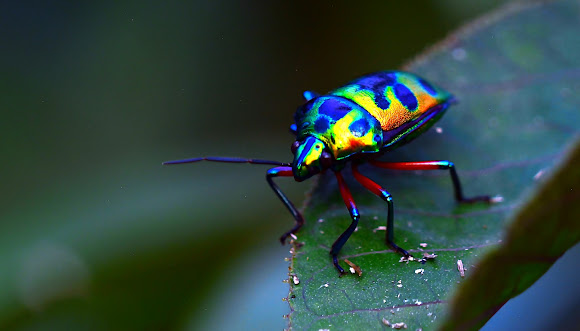 Scutelleridae is a family of true bugs. They are commonly known as jewel bugs or metallic shield bugs due to their often brilliant coloration. They are also known as shield-backed bugs due to the enlargement of the last section of their thorax into a continuous shield over the abdomen and wings. This latter characteristic distinguishes them from most other families within Heteroptera, and may lead to misidentification as a beetle rather than a bug. These insects feed on plant juices from a variety of different species, including some commercial crops. Closely related to stink bugs, they may also produce an offensive odour when disturbed. There are around 450 species worldwide.

Jewel bugs are small to medium-sized oval-shaped bugs with a body length averaging at 5 to 20 mm (0.20 to 0.79 in).They can easily be distinguished from stink bugs (Pentatomidae) because the shield-like enlarged last section of their thorax (known as the scutellum, Latin for "little shield") completely covers the abdomen and the wings. Despite their resemblance to beetles, jewel bugs are hemipterans or true bugs. The scutellum is an extension of the thorax, unlike the elytra of beetles which are hardened forewings. As such, jewel bugs have four membranous wings underneath the scutellum in contrast to two in beetles. The scutellum in jewel bugs also does not have a division in the middle and thus does not 'split open' when they take flight like in beetles. The heads of jewel bugs are triangular and the antennae have three to five segments. Like all heteropterans, jewel bugs are characterized by a segmented beak-like mouthpart (known as the rostrum).During feeding, jewel bugs inject proteolytic enzymes in their saliva into plants, digesting plant matter into a liquid form which they then suck up. The tarsus has three segments (tarsomeres).

Thanks folks for lovely comments,