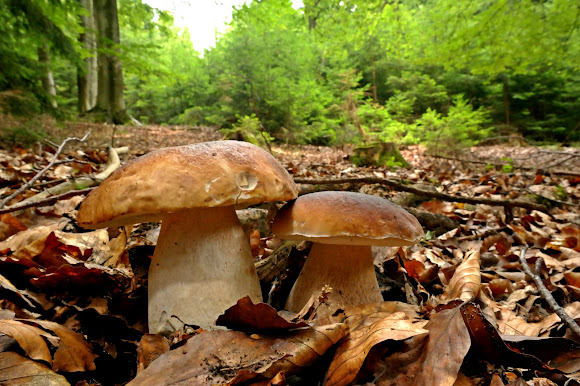 The cap of this mushroom is 7–30 cm (2.8–11.8 in) broad at maturity. Slightly sticky to touch, it is convex in shape when young and flattens with age. The colour is generally reddish-brown fading to white in areas near the margin, and continues to darken as it matures. The stipe, or stem, is 8–25 cm (3.1–9.8 in) in height, and up to 7 cm (2.8 in) thick—rather large in comparison to the cap; it is club-shaped, or bulges out in the middle. It is finely reticulate on the upper portion, but smooth or irregularly ridged on the lower part. The under surface of the cap is made of thin tubes, the site of spore production; they are 1 to 2 cm (0.4 to 0.8 in) deep, and whitish in colour when young, but mature to a greenish-yellow.The angular pores, which do not stain when bruised, are small — roughly 2 to 3 pores per millimetre. In youth, the pores are white and appear as if stuffed with cotton (which are actually mycelia); as they age, they change colour to yellow and later to brown. The spore print is olive brown. The flesh of the fruit body is white, thick and firm when young, but becomes somewhat spongy with age. When bruised or cut, it either does not change colour, or turns a very light brown or light red. Fully mature specimens can weigh about 1 kg (2.2 lb)

The fungus grows in deciduous and coniferous forests and tree plantations, forming symbiotic ectomycorrhizal associations with living trees by enveloping the tree's underground roots with sheaths of fungal tissue.

B. edulis is considered one of the safest wild mushrooms to pick for the table, as no poisonous species closely resemble it. The most similar poisonous mushroom may be the devil's bolete (Rubroboletus satanas), which has a similar shape, but has a red stem and stains blue on bruising. It is often confused with the very bitter and unpalatable Tylopilus felleus, but can be distinguished by the reticulation on the stalk; in porcini, it is a whitish, net-like pattern on a brownish stalk, whereas it is a dark pattern on white in the latter. Porcini have whitish pores while the other has pink. If in doubt, tasting a tiny bit of flesh will yield a bitter taste.It can also resemble the "bolete-like" Gyroporus castaneus, which is generally smaller, and has a browner stem.