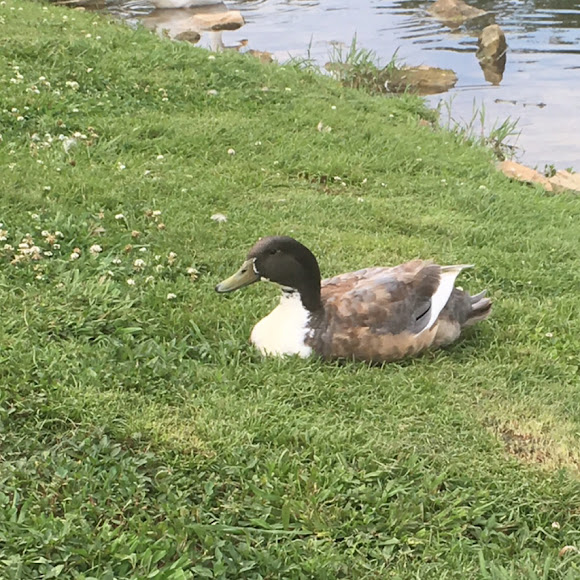 The mallard is a medium-sized waterfowl species although is often slightly heavier than most other dabbling ducks. Several species of duck have brown-plumaged females which can be confused with the female mallard. Both male and female mallards have distinct iridescent purple blue speculum feathers edged with white, prominent in flight or at rest, though temporarily shed during the annual summer moult. Upon hatching, the plumage colouring of the duckling is yellow on the underside and face (with streaks by the eyes) and black on the back (with some yellow spots) all the way to the top and back of the head. Its legs and bill are also black. As it nears a month in age, the duckling's plumage will start becoming drab, looking more like the female (though its plumage is more streaked) and its legs will lose their dark grey colouring.

The mallard is widely distributed across the Northern and Southern Hemispheres; in North America from southern and central Alaska to Mexico, the Hawaiian Islands, across Eurasia, from Iceland and southern Greenland and parts of Morocco (North Africa) in the west, Scandinavia to the north, and to Siberia, Japan,and South Korea, in the east, Australia and New Zealand in the Southern hemisphere.

It looks like you have a variety of domestic and possibly domestic/wild hybrids here. Here's an interesting article. http://www.birds.cornell.edu/crows/domdu...