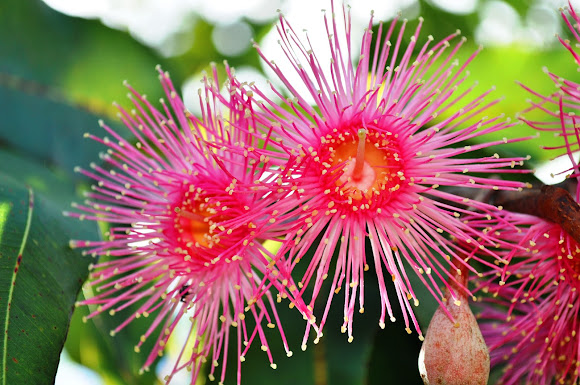 A native of south west Western Australia, but now growing widely throughout the country after various propagation techniques implemented including some grafting, although the latter does not produce excellent results - growing from seed seems preferred by some. This one growing in semi-garden bushland environment in sandy loam soils within 500m of major freshwater river system in north east NSW.

Thanks alana1, lucasm2 & ismael1 for your comments, Glad you liked the photos of this wonderful Australian plant.

I saw that one of yours Neil & it does look very similar, most likely same hybrid. There's a lot of cross breeding both by human hand & naturally. I wondered why I could get so close to a particular bird one day & realised it had its eyes closed, was taking a nap as it had become so drunk on nearby bottlebrush as well as anything else it tasted! They often just lay down under a tree, very funny.
Thanks also emilianog1, ximena1, yeal1, tomasp1, daphne1 for your comments.

Birds are so funny when they're drunk. I spotted this flowering eucalypt down in Sydney. Same species? This one's a hybrid cross called Summer Beauty. http://www.projectnoah.org/spottings/171...

Flowering gum is a general common term, but all 'gums' flower and most blossoms are either white, pale greenish white, cream , pink, orange or red. The Lorikeets would definitely be on them as with this one, I have had them falling from the tree staggering on the ground in a drunken stupor & wise not to approach them as they are very aggressive in those moments.

Did not realise Bloodwoods aren't real gums. I think these flowers are the ones that the Rainbow and Scaly-breasted Lorikeets go crazy for