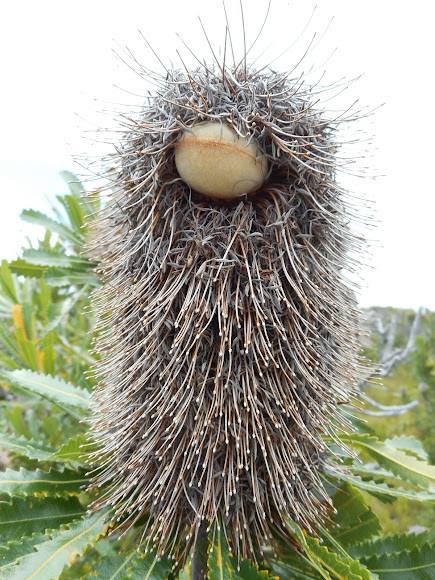 Big Bird?... and with lots of hungry mouths to feed! Wallum Banksia, a shrub of the family Proteaceae, is quintessential Australian flora. Found on the Australian east coast, it is encountered as a shrub or a tree to 8 m (26 ft) in coastal heath on deep sandy soil known as "wallum". It has wrinkled orange-tinged bark and shiny green serrated leaves, with green-yellow flower spikes, known as inflorescences, appearing in autumn. The flower spikes turn grey as they age and large grey follicles appear. Banksia aemula resprouts from its woody base, known as a lignotuber, after bushfires.

This spotting was on the Neembeeba Track in Blue Lake National Park, North Stradbroke Island. Exposed area with native vegetation, extreme winds (at times), salty air, and sandy soil. Full all-day exposure to the sun. Naturally-seeded trees, and quite prolific on this part of the island.

May Gibbs, an Australian author, wrote a series of children's books called Snugglepot and Cuddlepie, the first book in the series published in 1918. Snugglepot and Cuddlepie, the gumnut babies, are the protagonists of the story and are modelled on the appearance of young Eucalyptus (gum tree) nuts. The villains are the Banksia Men which are modelled on the appearance of aged Banksia 'cones', with follicles for eyes and other facial features. https://en.wikipedia.org/wiki/Snugglepot...

You are all too kind. Many thanks for all your beautiful comments. Never thought I'd win a place in any category, so 1st place in the Plant category is much appreciated. The deranged emu plant is very grateful too :)

Very well done on this win Neil. Always loved it, reminds me of some kind of crazy emu in disguise! A well deserved 1st place.

Congrats, Neil...Yeah Australia with it's weird and wonderful nature.

Neil, one could tell this would be a winner...I am not surprised it made the top spotting. Well Done!

Congrats Neil on the first place

Congratulations on this winner Neil!

Congratulations Neil, this fantastic image was the most popular in the Plant category in our 2016 Best Photo contest!

LOL Banksias tend to do that. As far as plants go, they're quite comical.

Thanks, Marta. They have heaps of character, that's for sure.

Thanks guys. As far as I know, Lauren, the seeds are released from the cones and drop to the ground, where they are activated after bushfires. There's plenty of ash for the seeds to germinate in. Here's a good link with plenty of banksia info. https://www.anbg.gov.au/banksia/ Bansias are one of my best Aussie flora favourites.

So interesting Neil! Do seeds come out of those pods? What do they look like? Wind borne?

THAT IS SO COOL

Thank you. This spotting was on North Stradbroke Island which is located just off Brisbane, in Queensland Australia. "Straddie" as it is known to the locals, is the world's second largest sand island. A great place to find plenty of wallum soil, and wallum banksias.

that's really cool stuff where did you see that stuff.

Congrats Neil for the SOTW!

Thanks, Jim and Daniele. A nice introduction for those that have never seen a banksia.

Congratulations Neil, and well deserved wit this fantastic series! Many of our followers had never heard of banksias, let alone this species.

Nice capture, Neil...you did yourself proud with this posting!