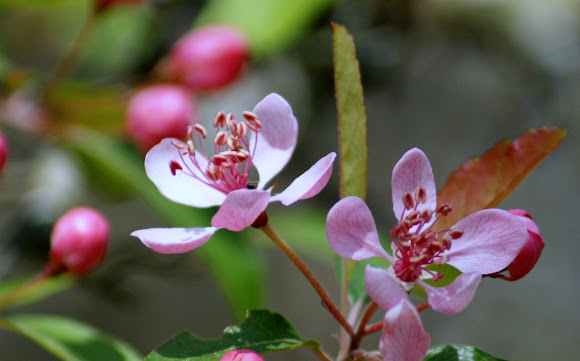 This small tree is 15-25' tall at maturity. It has a short trunk that is often crooked and a broad irregular crown. The trunk bark is variable, but it is often reddish gray-brown, rough-textured, and covered with longitudinal scales that often curve. Sometimes the trunk bark is more flat and less developed. The bark of branches is reddish brown or dark reddish gray and smooth. Along the larger branches, thorny side branches often develop. The blades of the alternate leaves are 1½-3" long and ¾-2" across; they are more or less ovate, coarsely toothed, and often shallowly cleft. The upper blade surface is yellowish green to bright green and hairless, while the lower surface is pale green and hairless (or nearly so, except for very young leaves). The slender petioles are ¾-2" long, light green to bright red (often the latter), and hairless to nearly hairless. Cymes of 2-6 flowers are produced from short spur-like branches. Individual flowers are 1-1¾" across, consisting of 5 pink petals (often becoming white with age), a green to reddish green calyx with 5 narrowly triangular lobes, a pistil with 5 styles, and 10-20 stamens. The exterior surface of the calyx (facing away from the petals) is smooth and hairless, while its interior surface is densely covered with appressed silky hairs. The slender pedicels are 1-2" long and hairless to nearly hairless. The blooming period occurs from mid- to late spring and lasts about 2 weeks. The flowers have a pleasant fragrance. Fertile flowers are replaced by a globoid fruit (pome) that is ¾-1½" across. The fragrant fruit is initially green, but it later becomes yellowish green or yellow at maturity; its surface is smooth and waxy. The hard flesh of the mature fruit is slightly juicy and sour-tasting; it contains several seeds toward the center of its interior. The root system is woody and branching, sometimes producing underground runners that form clonal offsets.

Habitats include open woodlands, woodland openings, woodland borders, savannas, and thickets. Wild Crab Apple can be found in both upland and bottomland areas where other deciduous shrubs and trees are present, particularly where there has been some disturbance to reduce the overhead canopy of dominant trees. This one was observed at the edge of a southern deciduous forest in Edgefield County, SC.