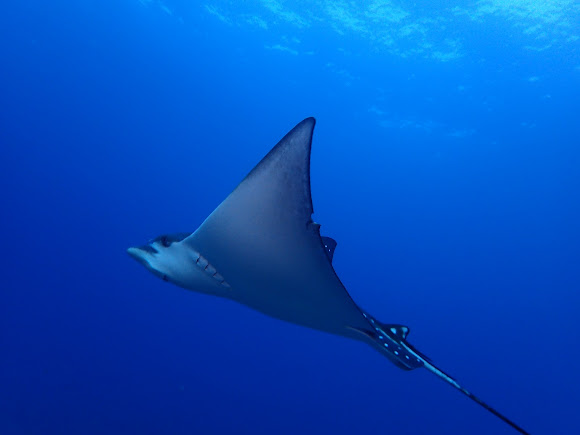 This was a medium-sized Spotted Eagle Ray of around 1.5 meters wing span. They are easy to identify with the spots on their back. They have long tails, which is longer than their body or wing span. They still have a venomous barb on their tail.

They can be found globally in the tropical region. In this spotting, they were sighted at the dive site called Monad Shoal which is famous for Thresher Sharks. This Eagle Ray is now resident to Monad Shoal.

I saw this same Spotted Eagle Ray several times during the month of April however, in this particular instance, I noticed a fish hook on its head. This was probably quite recently as previous sightings of it earlier in April doesn't show the fish hook. I was able to get quite close to it like less than a meter distance but was not able to approach it to remove the fish hook :(

Thanks, @Jason for your appreciation and glad you enjoyed my marine life Spottings :)

Thanks for your appreciation, @armadeus.4 and @Stephanie R.

Yes, the water was very clear and this was during the early morning dive around 6am, where we look for Thresher Sharks at the cleaning stations.
And for this dive, we were not supposed to use light (torch/flash/strobe) as that will scare off the Thresher Sharks as being deep water animals, their eyes are very sensitive to strong lights.

Stunning images Albert! The water is so clear that the fish hook can be seen. It's such a shame and I'm sorry you weren't able to remove it. Thank you for the info and for sharing your story :)