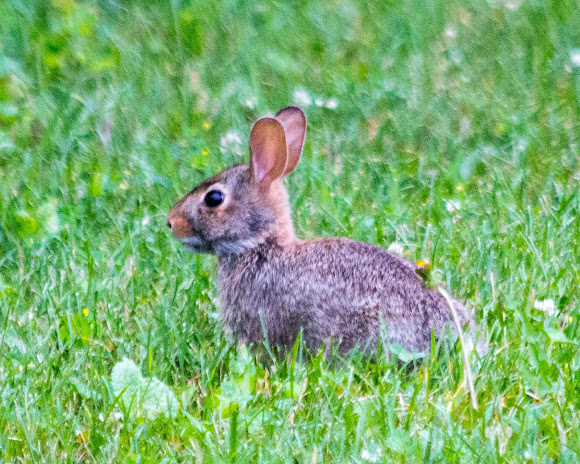 The eastern cottontail (Sylvilagus floridanus) is a New World cottontail rabbit, a member of the family Leporidae. It is the most common rabbit species in North America. The eastern cottontail is chunky, red-brown or gray-brown in appearance, with large hind feet, long ears, and a short, fluffy white tail. Its underside fur is white. There is a rusty patch on the tail. Its appearance differs from that of a hare in that it has a brownish-gray coloring around the head and neck. The body is lighter color with a white underside on the tail. It has large brown eyes and large ears to see and listen for danger. In winter the cottontail's pelage is more gray than brown. The kits develop the same coloring after a few weeks, but they also have a white blaze that goes down their forehead; this marking eventually disappears. This rabbit is medium-sized, measuring 36–48 cm (14–19 in) in total length, including a small tail that averages 5.3 cm (2.1 in). Weight can range from 1.8 to 4.4 lb (800 to 2,000 g), with an average of around 2.6 lb (1,200 g). The female tends to be heavier, although the sexes broadly overlap in size. There may be some slight variation in the body size of eastern cottontails, with weights seeming to increase from south to north, in accordance with Bergmann's rule. Adult specimens from the Florida Museum of Natural History, collected in Florida, have a mean weight of 2.244 lb (1,018 g). Meanwhile, 346 adult cottontails from Michigan were found to have averaged 3.186 lb (1,445 g) in mass.