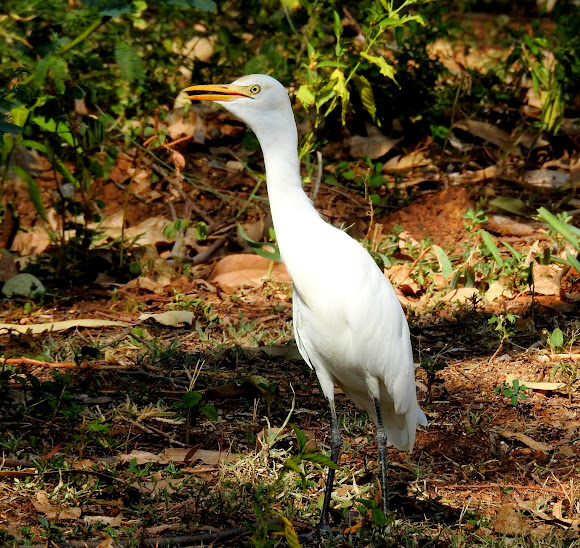 The cattle egret is a stocky heron with an 88–96 cm (35–38 in) wingspan; it is 46–56 cm (18–22 in) long and weighs 270–512 g (9.5–18.1 oz). It has a relatively short thick neck, a sturdy bill, and a hunched posture. The non-breeding adult has mainly white plumage, a yellow bill and greyish-yellow legs. During the breeding season, adults of the nominate western subspecies develop orange-buff plumes on the back, breast and crown, and the bill, legs and irises become bright red for a brief period prior to pairing. The sexes are similar, but the male is marginally larger and has slightly longer breeding plumes than the female; juvenile birds lack coloured plumes and have a black bill.

Although the cattle egret sometimes feeds in shallow water, unlike most herons it is typically found in fields and dry grassy habitats, reflecting its greater dietary reliance on terrestrial insects rather than aquatic prey.

Thanks Doren for confirming the ID.

Doren B 4 years ago

Yes, Cattle egret. The short bill, relative to other egrets, and the orange coloring at the top of the head are major clues for identifying this bird.