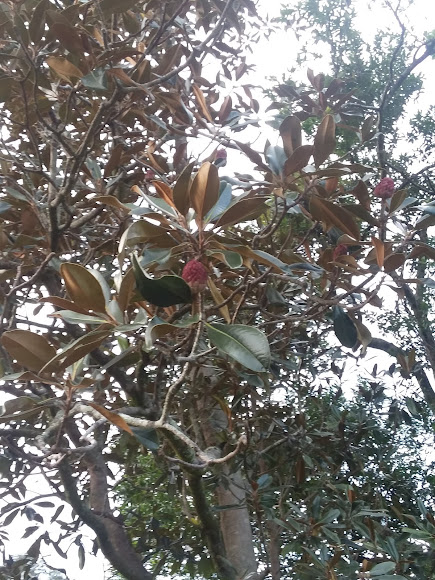 A southern magnolia growing in a yard in Cocoa Beach, Florida. As you can tell with no house to scale it with in this photo, these trees get huge. The national champion of this species comes from Mississippi, and that one is 121 feet tall. The history of M. grandiflora is as old as they are tall. First described by Carl Linnaeus (father of zoology, praise be to him) in the 10th Edition of his Systema Naturae in 1759. An iconic southern magnolia was planted by Andrew Jackson was planted over 200 years ago on the white house grounds. This southern magnolia was featured on the twenty dollar bill for several years and it has been tradition to gift cuttings and seeds from the tree to others. Sadly, a gash the tree suffered in the 1940s finally gave way to rot. Making the tree held up by supports and rods until in 2018 the National Arboretum recommended it be cut down due to the trees fragile condition and the supports failing. Aside from these famous magnolias, the southern magnolia is considered a popular ornamental plant and can be seen in gardens and yards all over the world. Their waxy leaves are very resistant to salt spray damage though are vulnerable to frost.

Native to the southeastern United States, from southeastern North Carolina to central Florida, and west to East Texas.