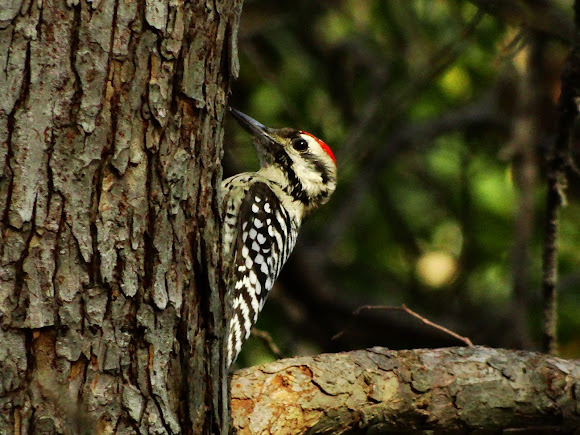 This is a male. It is a small woodpecker with a red cap (females do not have a red cap), short straight black bill, and zygodactyl feet. They have black and white markings on their backs which resemble the rungs of a ladder. Their wings are checkered black and white. The underparts of these woodpeckers are buff or white in color and speckled with black markings.

Habitat: thorn forests, deserts, river woods, groves and depending on location areas with the following trees and plants: mesquite, paloverde, catclaw, yucca, hackberry, and juniper to name a few. Range: southwestern United States, southern Nevada and southeastern Colorado, throughout Mexico, Central America, and Nicaragua. Nest: Cavities within trees,large cacti, and wooden posts. Ladderbacks have one brood per year with a clutch size of 2-7 eggs. Diet: Mainly insects. Will eat some berries and fruits.

In recent years I've seen more and more Ladderbacks in our area! FUN FACTS: 1. Ladderbacked Woodpecker's often hybridize with Nuttall's Woodpeckers. 2. The oldest Ladderback on record was four and a half years old. It was a male that was caught and then released again. Ref: https://www.allaboutbirds.org/guide/Ladd...

I agree Lauren! I have had the privilege of observing two nesting pairs within the past two years.