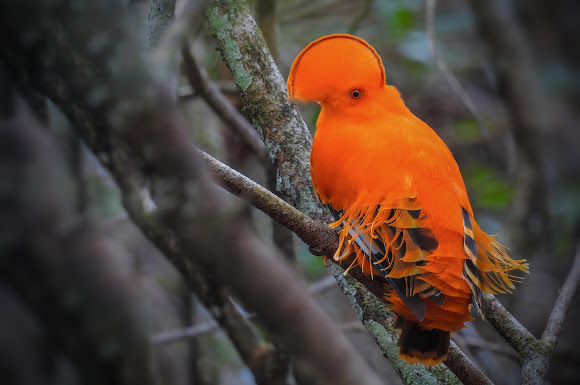 The Guianan cock-of-the-rock (Rupicola rupicola) is a species of South American passerine. It is about 30 centimetres (12 in) in length and weighs about 200 to 220 grams (7.1 to 7.8 oz). They are found in tropical rainforests, near its preferred habitat of rocky outcrops. The males plumage is bright orange and the males have a prominent half-moon crest. The females are brownish in colour, and are generally much duller coloured than the males. It is one of two species of the genus Rupicola, the other being the Andean cock-of-the-rock. The Guianan cock-of-the-rock lives across the forested region of northeastern South America. Its diet consists mostly of fruit, but sometimes includes small snakes and lizards.

As suggested by its name, the Guianan cock-of-the-rock is found in the Guianan Shield, occurring in French Guiana, Suriname, Guyana, southern Venezuela, eastern Colombia and northern Amazonian Brazil. Its preferred habitats are humid forests near rocky outcrops. They are normally found at an altitude of 300 to 2,000 metres (980 to 6,560 ft). The Guianan cock-of-the-rock has distinctive territorial markings. Males usually take dominance of an area on the ground, although they sometimes they occupy middle strata in forests. They make their characteristic marking by clearing out debris from the ground, including twigs, leaves, and pellets. This area is called a “court”. Quality of courts are known to have some influence on mate choice. The court quality is determined by the territory density and location to the center of activity in the lek. The reason for the focus on the center of activity in the lek is that successful males tended to own courts in the most densely clustered lek areas. Guianan courts are commonly found in the Guianan Shield, a forested region in northeastern South America.

Parabéns, Aisse. This is the one bird I'd like to see in person.

Beautiful SOTD! Congrats Aisse and thanks for sharing.

Awesome capture Aisse,congrats on the well deserved SOTD and thanks for sharing

Congrats Aisse, this incredible bird has been selected as Spotting of the Day!

Great photo, what a beautiful bird!