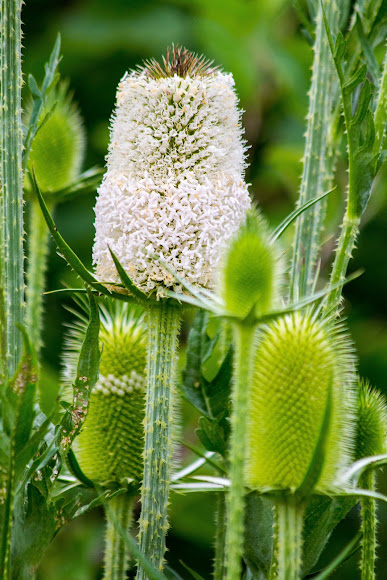 a species of flowering plant known by the common name wild teasel. It is native to Eurasia and North Africa, but it is known in the Americas, southern Africa, Australia and New Zealand as an introduced species and often a noxious weed. It forms large monocultures (displacing other species) in areas it invades that have favorable climates and none of its biological control species. The inflorescence is a cylindrical array of lavender flowers which dries to a cone of spine-tipped hard bracts. It may be 10 centimeters long. The genus name is derived from the word for thirst and refers to the cup-like formation made where sessile leaves merge at the stem. Rain water can collect in this receptacle; this may perform the function of preventing sap-sucking insects such as aphids from climbing the stem. The leaf shape is lanceolate, 20–40 centimetres (7.9–15.7 in) long and 3–6 centimetres (1.2–2.4 in) broad, with a row of small spines on the underside of the midrib. Teasels are easily identified with their prickly stem and leaves, and the inflorescence of purple, dark pink or lavender flowers that form a head on the end of the stem(s). The inflorescence is ovoid, 4–10 centimetres (1.6–3.9 in) long and 3–5 centimetres (1.2–2.0 in) broad, with a basal whorl of spiny bracts. The first flowers begin opening in a belt around the middle of the spherical or oval flowerhead, and then open sequentially toward the top and bottom, forming two narrow belts as the flowering progresses. The dried head persists afterwards, with the small (4–6 millimetres (0.16–0.24 in)) seeds maturing in mid-autumn.