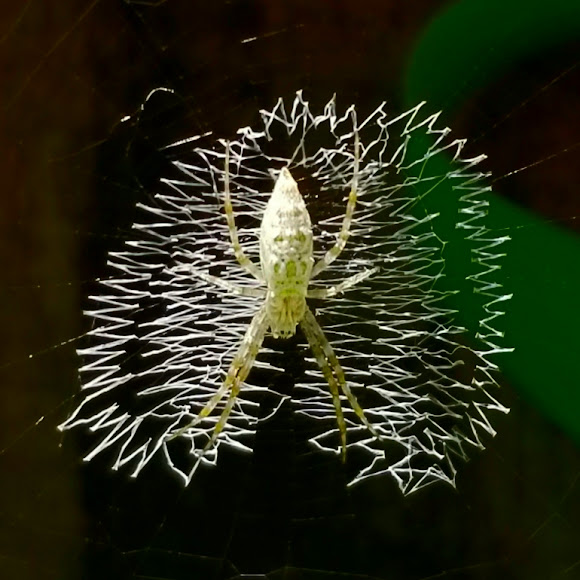 This spider was seen in my garden at the very bottom of a fence. The only reason why I noticed this spider is because of it's unique web. Also known as the Yellow garden spider, this spider gets it's name from it's web. Yellow garden spiders often build webs in areas adjacent to open sunny fields where they stay concealed and protected from the wind. The spider can also be found along the eaves of houses and outbuildings or in any tall vegetation where they can securely stretch a web. Female Argiope aurantia spiders tend to be somewhat local, often staying in one place throughout much of their lifetime. The web of the yellow garden spider is distinctive: a circular shape up to 2 feet (60 cm) in diameter, with a dense zigzag of silk, known as a stabilimentum, in the center. The purpose of the stabilimentum is disputed. It is possible that it acts as camouflage for the spider lurking in the web's center, but it may also attract insect prey, or even warn birds of the presence of the otherwise difficult-to-see web. Only those spiders that are active during the day construct stabilimenta in their webs. The males are smaller than the females, and the females have a bright yellow throughout the body, while males have a transparent like color.

In my garden, Fort Worth, Texas. They are found close to the ground and in the shade to avoid predators, and the wind breaking their nests.

To construct the web, several radial lines are stretched among four or five anchor points that can be more than three feet apart. The radial lines meet at a central point. The spider makes a frame with several more radial lines and then fills the center with a spiral of silk, leaving a gap between the spiral rings, starting with the innermost ring and moving outward in a clockwise motion. To ensure that the web is taut, the spider bends the radial lines slightly together while applying the silk spiral. The female builds a substantially larger web than the male's small zigzag web, often found nearby. Never saw a female, but I could soon.