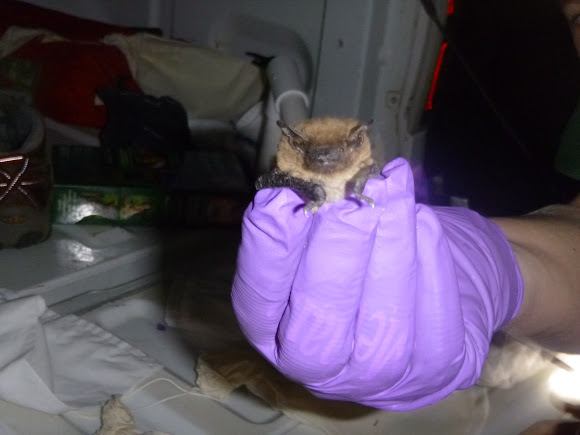 Evening bats are mostly brown, although the lighting in these photos from our headlamps makes this one look kind of blonde. They're pretty small bats, but their attitude makes up for it. We've been calling them the chihuahuas of the bat world, they're small but fierce lol. As you can see in the 2nd pic, they like to chew on you, but their teeth aren't able to break the glove and they don't have the jaw pressure to really hurt you. That said, you should never handle bats unless trained to do so, and always wear gloves when you do. We were actually wearing leather gloves under our Nitrile gloves. Key things that I noticed when ID'ing these bats: their small size, their attitude, and the stinky smell they have.

These guys roost in trees, and are almost never found in caves. Instead of roosting in the leaves like red bats, evening bats roost in tree cavities or under bark. Occasionally they are found in attics. They tend to prey on beetles, which may be why they stink like beetles.

This bat was captured in a mist net by trained and permitted researchers. Proper care was given to each animal, and white-nose protocol was followed. Weather: clear, no breeze, low of 69 F. Nets were placed over a pond with pines around it, and a small grassy field nearby.