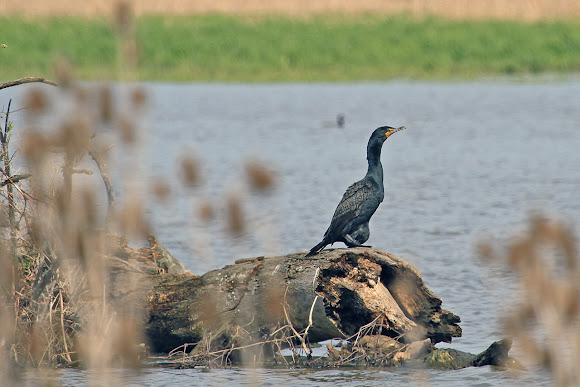 The gangly Double-crested Cormorant is a prehistoric-looking, matte-black fishing bird with yellow-orange facial skin. Though they look like a combination of a goose and a loon, they are relatives of frigatebirds and boobies and are a common sight around fresh and salt water across North America—perhaps attracting the most attention when they stand on docks, rocky islands, and channel markers, their wings spread out to dry. These solid, heavy-boned birds are experts at diving to catch small fish.

Double-crested Cormorants are colonial waterbirds that seek aquatic bodies big enough to support their mostly fish diet. However, they may roost and form breeding colonies on smaller lagoons or ponds, and then fly up to 40 miles to a feeding area. In addition to fishing waters, cormorants need perching areas for the considerable amount of time they spend resting each day. After fishing, cormorants retire to high, airy perches to dry off and digest their meals—rocks, wires, tops of dead trees, ship masts. They tend to form breeding colonies in clusters of trees in or near water. After a while, masses of cormorant guano may kill these trees and the trees may topple, at which point the cormorants may switch to nesting on the ground. A cormorant’s diet is almost all fish, with just a few insects, crustaceans, or amphibians. They eat a wide variety of fish (more than 250 species have been reported), and they have impressive fishing technique: diving and chasing fish underwater with powerful propulsion from webbed feet. The tip of a cormorant’s upper bill is shaped like a hook, which is helpful for catching prey. When cormorants happen to catch a crustacean like a crayfish, they exhibit a little flair in eating it—hammering the prey on the water to shake its legs off, then flipping it in the air and catching it headfirst for easy swallowing. Nest Description Both Double-crested Cormorant mates work on the nest, with the male bringing most of the material and the female doing the building. The nest is mostly made of finger-size sticks, with some seaweed and flotsam, and lined with grass. Nests are 1.5 to 3 feet in diameter and 4 to 17 inches high; ground nests tend to be wider than tree nests, but tree nests have deeper interiors. Breeding cormorants readily steal nesting materials from a nearby nest that’s not guarded The male chooses the nest site and then attracts a female. Nests can be on the ground, on rocks or reefs with no vegetation, or atop trees, which may be alive when a cormorant colony first forms but typically die after a few years from the guano build-up. Nests are built in the center of a colony first, then expand outward.

Cool Facts From a distance, Double-crested Cormorants are dark birds with snaky necks, but up-close they’re quite colorful—with orange-yellow skin on their face and throat, striking aquamarine eyes that sparkle like jewels, and a mouth that is bright blue on the inside. The double-crest of the Double-crested Cormorant is only visible on adults during breeding season. The crests are white in cormorants from Alaska, and black in other regions. Cormorants often stand in the sun with their wings spread out to dry. They have less preen oil than other birds, so their feathers can get soaked rather than shedding water like a duck’s. Though this seems like a problem for a bird that spends its life in water, wet feathers probably make it easier for cormorants to hunt underwater with agility and speed. Double-crested Cormorant nests often are exposed to direct sun. Adults shade the chicks and also bring them water, pouring it from their mouths into those of the chicks. In breeding colonies where the nests are placed on the ground, young cormorants leave their nests and congregate into groups with other youngsters (creches). They return to their own nests to be fed. Accumulated fecal matter below nests can kill the nest trees. When this happens, the cormorants may move to a new area or they may simply shift to nesting on the ground. The Double-crested Cormorant makes a bulky nest of sticks and other materials. It frequently picks up junk, such as rope, deflated balloons, fishnet, and plastic debris to incorporate into the nest. Parts of dead birds are commonly used too. Large pebbles are occasionally found in cormorant nests, and the cormorants treat them as eggs. The oldest known Double-crested Cormorant was more than 22 years old, banded in Ontario in 1984 and found in Louisiana in 2006.