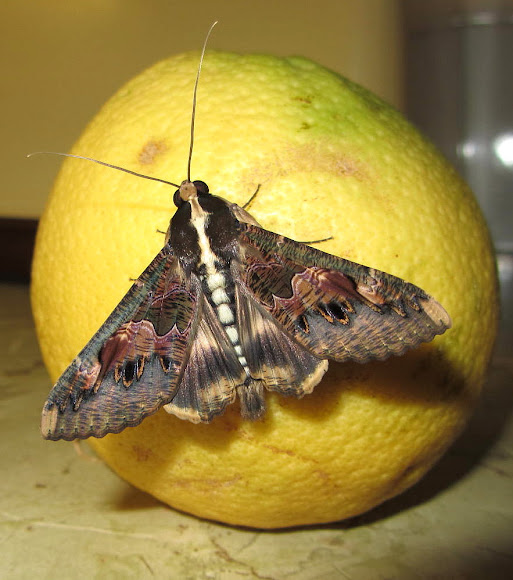 Large heavy moth, wings intricately patterned in browns and fine black lines with iridescent pinks and purple overlays when the light catches them otherwise appears drab brown from a distance. The upper legs are covered by a thick layer of dense cream coloured hairs which gives the impression that the moth is wearing bloomers The hind wings with broad black and pale orange stripes are normally hidden by the forewings which are held in a delta shape reminiscent of the hawkmoths.

attracted to house lights where they tend to thump around the room before coming to rest.

These moths are also notorious due to their attraction to beer, particularly in cans, and can become quite a menace around the campfire when camping - hence the common names sundowner and beer moth. On one such occasion I was camping in the bush with a couple of mates and we were inundated by these moths and their common associates, the cream-striped owl moth. You had to keep a hand firmly over the top of your beer can that evening for fear of imbibing a mouthful of moth. The next morning every nook and cranny, including the engine compartment of our vehicle was hung with slumbering and groggy moths, one could imagine they were all suffering from severe hang-overs.

like so many 'little brown jobs' its worth looking twice.