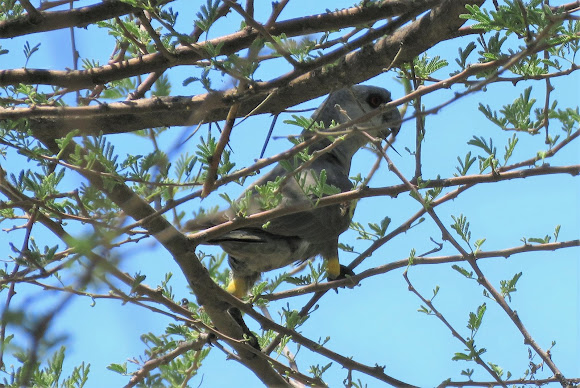 This is a small African near-endemic parrot, roughly the size of a larger pigeon. This one was a subject of an one hour chase on foot under over 40 degree Celsius and that felt like a footing in an oven... The light was almost blinding, and colours in these pics suffered, so I'm not really sure if this bird was a male or female - males are uniformly brown-grey, while females, from this angle, show blue rump. But the main ID marks, present in both sexes, are the yellow patch on shoulders and yellow socks, well visible in particular in pics 1 and 2.

This is a near-endemic species of parrot found in north-western Namibia and south-western Angola. Here, seen in Kunene region of Namibia (northwest), around Sesfontein town, in arid open acacia tree-and-shrub landscape, very dry (but still magnificent and rich in wildlife) at the moment, following a three-year dry-spell. This individual was observed around a water point, much greener than the rest of the area.

Endemic or near-endemic, this one was a lifer for me, and it appears the lifer for PN too.

Excellent spotting, Zlatan. Definitely worth the hardship to document. The only advantage to 40C+ in Namibia is that it's a dry heat, and not humid! And the blinding light is such a contrast to the softer light of Europe.