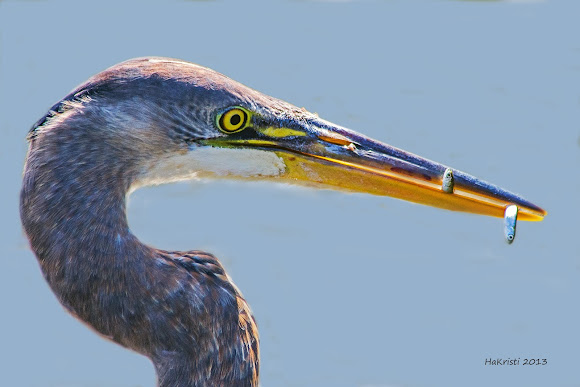 "Large wading bird in the heron family Ardeidae, common near the shores of open water and in wetlands over most of North America and Central America as well as the Caribbean and the Galápagos Islands." - wikipedia

"The Great Blue Heron is found throughout most of North America, as far north as Alaska and the southern Canadian provinces. The range extends south through Florida, Mexico and the Caribbean to South America. Birds east of the Rocky Mountains in the northern part of their range are migratory and winter in Central America or northern South America. From the southern United States southwards, and on the Pacific coast, they are year-round residents."- wikipedia

This heron is a local resident in Gibsons, BC, Canada. Everyday it is in the small Marina. This time it was lucky to get 2 small fish with one movement.

great shot and with bonus (fish)

Welcome to Project Noah! I can tell already that you're going to have amazing spottings, I look forward to seeing more!

This photo could also go in the mission Breeding Birds of BC! I have a pond that a Great Blue Heron comes to and so I had a heron etched in one of the windows by my front door. Love these birds!

wonderful capture KrisztinaHarasztosi welcome to Project Noah, I love the passion that you put into your captures.

Thanks. I add it to that mission :)

Welcome to Project Noah, KrisztinaHarasztosi.
This spotting could go in the Hunters and Animal Feeding Behavior mission at http://www.projectnoah.org/missions/8463...