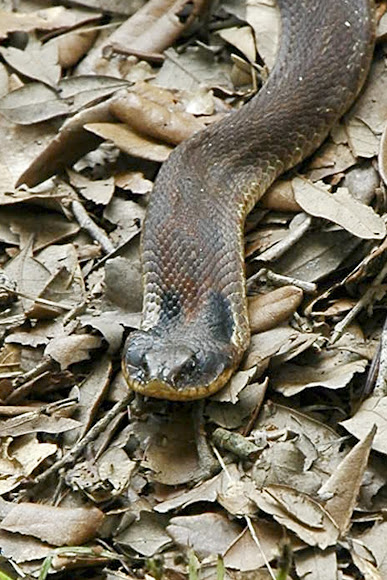 This snake had a short body for its thickness. Its coloration was spotted brown on its back and lighter underneath with two large black patches on its neck. It had an upturned nose. (Photographs were taken by my mom and me.)

Found in a grassy area at the edge of a primarily deciduous wood and near a marshy field in Southeast Texas. (Map location only approximate.)

I came across this snake on a walk in my yard, its body still and flattened as though it was dead and dried up. I stared at it for several minutes and yelled for a family member, then tossed a small piece of a rotted stick at the snake. It did not respond. I went inside, convinced it was dead. I went back outside to take a picture, but was shocked to find that it had 'reinflated' and started back towards the woods in my absence. It spread its neck like a cobra's hood, and my brother said he heard it hiss. It coiled, keeping a careful eye on my brother and me while my mom tried to find a match on the internet. After she identified the snake as a hog-nosed snake, we left it to relax and return to the woods on its own. While I am confident this snake belongs to the genus Heterodon, I would like help identifying its species. Update: my thanks to ForestDragon and AshleyT for identifying the species!

Wow! That is impressive. Awesome spotting of this unusual snake. Great notes too.

Great notes! Eastern hognose is the only species in range for you :) They are very pretty snakes and the behavior you encountered is extremely common, they love to play dead! Always a treat to find these guys!

You are correct. This is an Eastern Hognose. They are great bluffers.

Hello Harmony D. and Welcome to the Project Noah community! We hope you like the website as much as we do. There are many aspects to the site and community. The best way to get started is to read the FAQs at http://www.projectnoah.org/faq where you can find all the tips, advice and "rules" of Project Noah. You, like the rest of the community, will be able to suggest IDs for species that you know (but that have not been identified), and make useful or encouraging comments on other users' spottings (and they on yours).
There are also "missions" you can join and add spottings to. See http://www.projectnoah.org/missions . A mission you should join is the http://www.projectnoah.org/missions/2004... to chose the best wild photo of 2016,only the spottings added to that mission are eligible.Note that most missions are "local". Be sure not to add a spotting to a mission that was outside of mission boundaries or theme :) Each mission has a map you may consult showing its range. We also maintain a blog archive http://blog.projectnoah.org/ where we have posted previous articles from specialists from different geographical areas and categories of spottings, as well as wildlife "adventures".
So enjoy yourself, share, communicate, learn. See you around :)