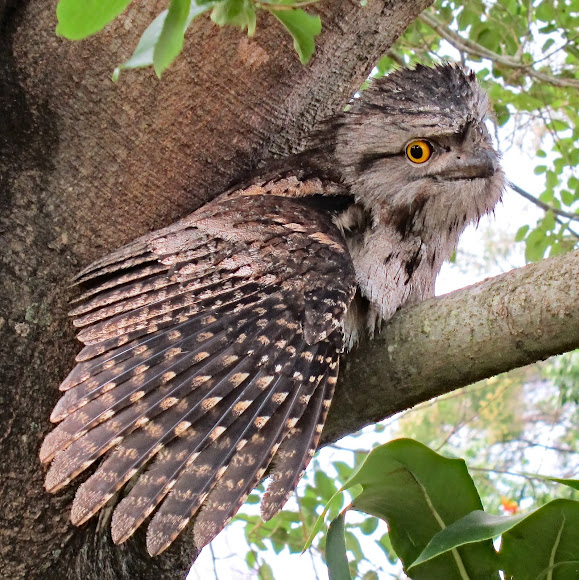 Tawny Frogmouths are Australian native birds and are related to the Nightjar family. They are often mistaken for owls but are, in fact, more closely related to kookaburras and kingfishers than to owls. Males and females look alike and are 35–53 cm (14–21 in) long. This very bulky species can weigh up to 680 grams (1.5 lbs) and, an overweight zoo specimens, up to 1400 grams (3.1 lbs). This species thus reaches the highest weights known in the Caprimulgiformes order. They have yellow eyes and a wide beak topped with a tuft of bristly feathers. They make loud clacking sounds with their beaks and emit a reverberating booming call. Tawny Frogmouths hunt at night and spend the day roosting on a dead log or tree branch close to the tree trunk. Their camouflage is excellent and by staying very still and upright, they look just like part of the branch. The bulk of the Tawny Frogmouth's diet is made up of nocturnal insects, worms, slugs and snails. Small mammals, reptiles, frogs and birds are also eaten. Most food is obtained by pouncing to the ground from a tree or other elevated perch. Some prey items, such as moths, are caught in flight, which has led to many unfortunate instances of birds being hit by cars while chasing insects illuminated in the beam of the headlights. They catch their prey with their beaks rather than with their talons, another way in which they are different from owls. Owls fly around at night hunting food, but Tawny Frogmouths generally remain sitting very still on a low perch, and sometimes drop from their perch onto the prey on the ground. The bird's large eyes and excellent hearing aid nocturnal hunting, and like the owls, they are completely silent in flight. I can attest to that personally.

The Tawny Frogmouth can be seen in almost any habitat type (except the denser rainforests and treeless deserts), including heath, forest and woodlands, urban and rural areas. I have personally witnessed these birds in my own backyard, roosting during daylight hours in various native and imported trees, on fences and verandah railings, under eves on gutter downpipes, and on one occasion, on the top of an open door. A friend of mine said she had one in her kitchen, perched on top of a cupboard. If they feel safe, why not?!

This beautiful Tawny Frogmouth has been harassed all morning by a Magpie, and from this expression has had quite enough. Being nocturnal, it would usually perch very quietly in the tree and sleep all day in a position known as 'stumping', or as I like to call it, 'doing the stick thing'. However, on this occasion it was spotted. It's the first time I've ever seen the wing markings in full display simply because Tawnies fly at night. Had it not been for the Magpie's intrusion, I would never have seen this bird in such an animated 'daytime' pose.

Thanks, Joshua. It was wonderful to see this fellow in such an animated pose- a rare thing in daylight hours.

Thanks, Pam and Marta. I christened my old Canon S90 with this spotting, and my new Canon with my latest frogmouth spotting. They bring me good luck. Lots of joy too when I see them.

Many thanks to all for the comments, and Sachindra, cheers for the 'two thumbs up'! I was hoping to see some chicks this (southern) Summer past, but none were to be found. I do have some photos of a previous batch so I'll post those instead. This was the only Tawny I saw all Summer which is most unusual, but hopefully the next breeding season will be more fruitful. These are wickedly awesome birds, and one of my favourites :-)

Fabulous photos, thank you for the education.

SO CUTE!! I LOVE frogmouths..

i wish i could see that like you did!!!

Fun fact! The tawny frogmouth has perfected an extremely energy efficient way of hunting. Unlike most other nocturnal birds that fly to catch insects, the well-camouflaged frogmouth remains very still, blending into its surroundings. Any unsuspecting insect that lands on or close by it is quickly maneuvered by the whisker-like feathers above its beak, and eaten. During the day, it usually sleeps in a sedentary position, raising its head and stiffening its body if disturbed to mimic a branch, in a behavior known as “stumping”. It’s an effective strategy, as you can see here!

Spectacular! What an awesome bird!

This is fast becoming one of my favorite birds. Love the expressions! Thanks for the interesting narrative.

Gorgeous series! The many faces of a tawny!! : )