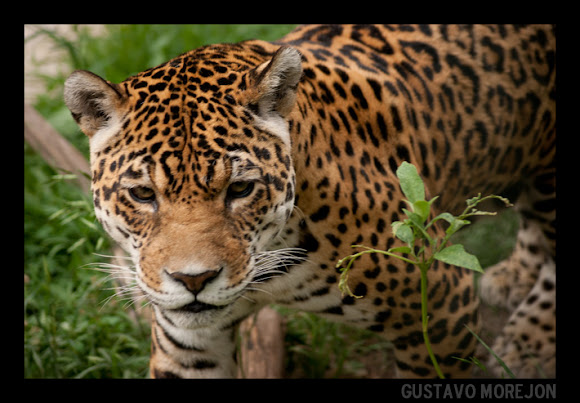 From Wikipedia : "The Jaguar is a big cat, a feline in the Panthera genus, and is the only Panthera species found in the Americas. The jaguar is the third-largest feline after the tiger and the lion, and the largest in the Western Hemisphere. The jaguar's present range extends from Southern United States and Mexico across much of Central America and south to Paraguay and northern Argentina. Apart from a known and possibly breeding population in Arizona (southeast of Tucson), the cat has largely been extirpated from the United States since the early 20th century".

This is a Jaguar that has been rescued, like all the animals at the Guayllabamba Zoo and Rescue Center. I don't know the whole story, but it was kept in captivity and in very bad conditions in his old place and it is recovering at the center. The wild animals traffic here in South America is very cruel and the problem is that when the authorities rescue the animals, they usually don't know what to do with them, so there is a need of a Rescue Center with professional vets ready to deal with the situation. If the animal is in bad shape and you just release the animal, it will die for sure. If the animal was kept in captivity for too long, as it happened with bears for example, they go close to the people houses and usually they are hunted easily. The rescue center work to recover properly the animals and send them back to nature in the best possible conditions. Obviously, it is not always possible, but if the case is that the animal can't be released into nature, they take care of the animal in the best possible way. I think this Jaguar will soon be released into a national park, because it is getting in a very good shape and is quiet aggressive (which is a very good sign for a feline).

Yes, please do tell us more about this gorgeous cat.

can you tell us his story?