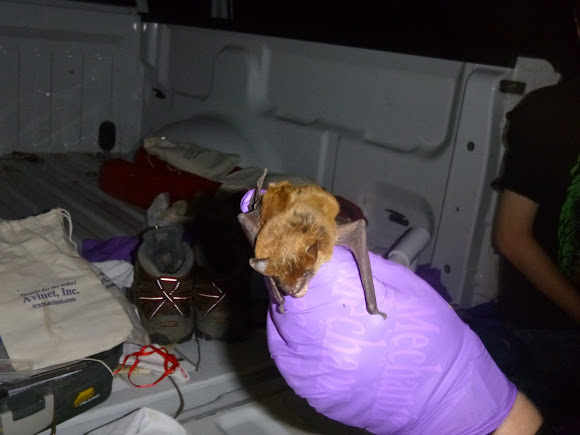 Well, a big brown bat is exactly that: big and brown. And a bat. The last photo got our headlamps shining through his fur, and gives you a false sense that the fur is lighter than it really is. That's just the headlamps, but it made a cool photo so I put it up. To ID this bat, in comparison size-wise, he was noticeably larger than the other bats we were capturing, and in fact his forearm length was 47mm, much longer than the others (which were all in the 30's).

Big brown bats are found in a variety of habitats from houses to forests. They traditionally roost under bark in trees, but will roost in bat houses too. They have a wide species range from the far north of Canada to southern Mexico. They forage in desert habitat, agricultural fields, and forests. They play a key role in reducing agricultural pests such as cucumber beetles. This bat was found at the SFA experimental forest.

This bat was captured in a mist net by trained and permitted researchers. Proper care was given to each animal, and white-nose protocol was followed. Weather: clear, no breeze, low of 69 F. Nets were placed over a pond with pines around it, and a small grassy field nearby.