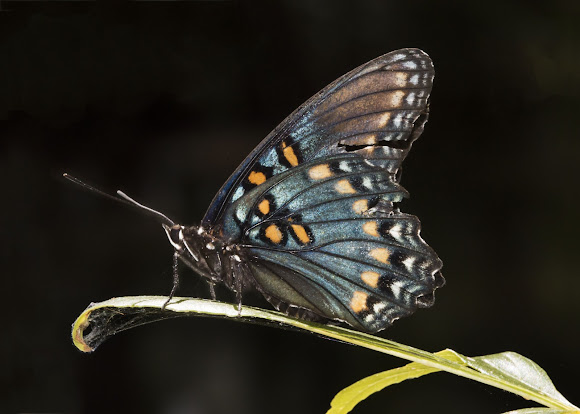 Iridescent blue on the topside. Red spots on the underwing, on blue background as pictured. I noted that almost all spottings on Project Noah are in the eastern and mid-western parts of the US. This spotting appears to be native to Arizona and New Mexico which is a variation from those posted from other areas. The markings on the upper wing are somewhat different. They in some ways mimic pipeline swallowtails in appearance.

This butterfly was spotted in Tonto Bridge State Park, central Arizona, in the Coconino National Forest in one of the narrow V-shaped ravines that stem from the Mogollon Rim. Pine Creek, a year-round stream in the canyon, is lined with ponderosa pine, pinyon, juniper and scrub oak, along with mosses and ferns at several waterfalls in the area.

This striking butterfly is interesting in that it does not frequent flowers for nectar, but seem to be more attracted to damp soil, and decaying vegetation…according to the Western National Parks Association. They are easily approached, and were frequently spotted in several areas from Sedona to Payson in central Arizona.