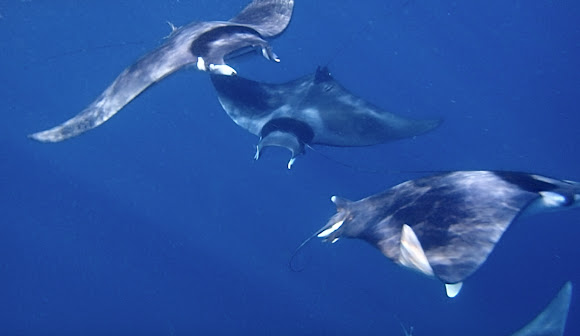 The devil fish or giant devil ray (Mobula mobular) is an endangered species of eagle ray in the family Myliobatidae. The devil fish is larger than its close relative the lesser devil ray. It grows to a maximum recorded length of 5.2 metres (17 ft), making it one of the largest rays. It possesses a spiny tail. We saw this Group of 6 Devil Rays during our Boat ride coming back from a dive. They were most likely around 2.5 - 3 meters wide in wing span. They were breaching and splashing near the surface and I decided to ask the Boatman to go near them. They were being very playful, splashing at the surface and then swimming in circles just around the Boat and I decided to get in the water to get some in-water footages of them. According to the a friend, they were probably courting.

It is currently listed as endangered, mostly due to bycatch mortality in unrelated fisheries. Despite being an endangered species, they are not protected in most countries, including Philippines. However, over in Malapascua, they are protected. Unfortunately, this Devil Rays migrate or covers a wide area of sea/ocean and being protected in a Marine Protected Area does not do them much help, as they can still be fished or hunted once they are out of the Marine Protected Area.

Yes, Polilla, they are very graceful animals, to see them gliding in the water is like birds flying.

The unfortunate part is aside from the risk of by-catch, they have also become targeted catch, who supplied their Gills to the Chinese market as Traditional Chinese Medicine. You can read up more about it here :