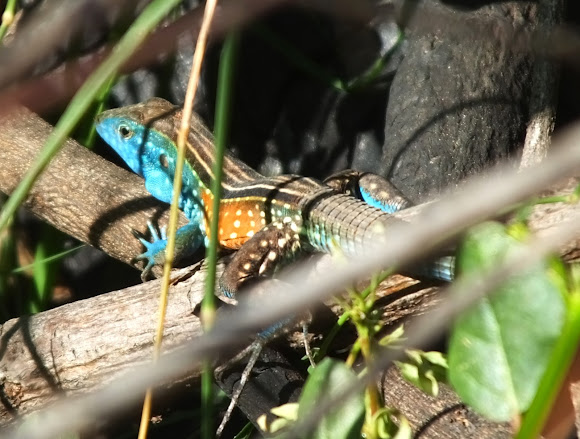 As hatchlings, rainbow whiptails have nine pale white longitudinal stripes with intervening dark blue or brown regions. Each primary stripe is labelled as either being ventrolateral, lateral, dorso-lateral or paravertebral. The vertebral or mid dorsal stripe is the least defined and deeply coloured positioned between the paravertebral stripes. The lower pair of stripes on each sides differ from the upper pairs by their irregular margin with fused spots Moreover, the juvenile’s hind legs are covered by distinct spots. Henceforth, females retain the juvenile pattern whilst males become brilliantly coloured during adulthood. These teiids have marked sex-colour dimorphism with females (65mm) smaller than males (88mm) in snout-vent length and head size. This contributes to the differences in body mass of the sexes. Males have yellow ventral surfaces, turquoise tails and flanks, blue-green face and throat with white spotted sides. The male rainbow whiptail is known as five stripes due to remnants of ventrolateral and lateral pairs of stripes.

Found these in a bush in Puerto Colombia, Aragua, Venezuela. Dry and hot area between jungle and coast.

This little one was in a big bush with several other males and females. See spotting https://www.projectnoah.org/spottings/18... Look at those gorgeous colors!