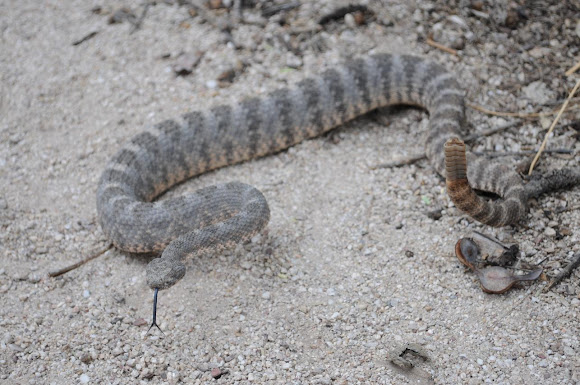 A medium sized rattlesnake (up to 885 mm or 35" in total length excluding rattle). Base coloration is variable (even within local populations). Most specimens are either blue-gray or orange-brown. There is often an infusion of peach or orange coloration on the lower sides of the body. Crossbars or "tiger" bands formed by dark scales and small dark flecks cross the back. The pupils are vertically elliptical and the dorsal scales are keeled. The neck is slender and the triangular head is very small relative to the size of the body. On the end of the tail is a large rattle composed of a series of loosely interlocking keratinous sections. A new section is added each time the snake sheds its skin. Its relatively distinct bands, small head, and lack of black rings on the tail tip distinguish this snake from the similar looking Speckled Rattlesnake. (information from http://www.reptilesofaz.org/ )

Hiking trail next to a resort

I found 2 of these rattlesnakes on 2 consecutive days.

It was actually all puffed up. I have successive photos that show it inflated and then back to normal. It was just a product of me startling it and then dropping down for the photos.

That is really scary. They are supposed to be cranky when shedding.

What a great encounter!