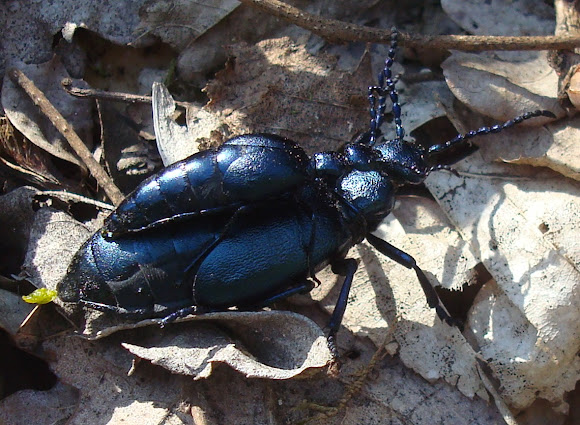 Meloe spp. known as "oil beetles" or "blister bugs" because they release oily droplets of hemolymph from their joints when disturbed; this contains cantharidin, a poisonous chemical causing blistering of the skin and painful swelling. Members of this genus are typically flightless, without functional wings, and shortened elytra. They are hypermetamorphic, going through several larval stages, the first of which is typically a mobile triungulin that finds and attaches to a host in order to gain access to the host's offspring. In this genus, the host is a bee, and each species of Meloe may attack only a single species or genus of bees; while sometimes considered parasitoids, it appears that in general, the Meloe larva consumes the bee larva along with its provisions, and can often survive on the provisions alone, thus they do not truly qualify. Females are usually much bigger than males as can be seen on my photos. Size, length: 11 - 35 mm, I would say that my female specimen was about 3,5 cm.

It lives in meadows, field margins and other warm sites in all but the far north of the continent. It lacks hind wings and the elytra are correspondingly reduced in size. This one was however found in the forest...